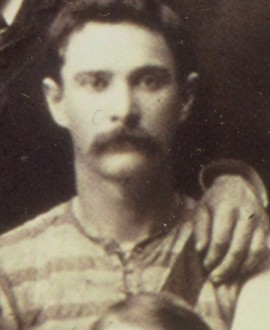 Date of Death
7 November 1931
Recruited From
Britannia
Collingwood Debut
Round 14, 1892

Jim Duncan was one of the ‘big three’ figures in Britannia’s history who subsequently became involved with Collingwood after it was formed.

Like Jack Joyce and Alf Dean, he was a player and official with Britannia for more than a decade, and he would go on to play an important role in Collingwood’s first season.

Jim (James) started with Britannia in its first season, 1878, and was still playing in its last, 1891, by which stage he was vice-captain. As a player he doesn’t seem to have quite been at the level of Dean and Joyce, but he was still good enough to win a silver watch for best back play in 1889, and then a punching ball from Tom Sherrin for best forward play in 1891. That shows he was versatile. Plus it’s also likely he won other awards earlier in his career, but such recognition wasn’t always reported in the newspapers of the early-mid 1880s.

Looking at the Britannia team photo for 1891, Jim seems to have been a tall man – only marginally smaller than Bill Proudfoot, but more slightly built. That suggests he was probably a key position player capable of playing at both ends of the ground.

At the end of the 1887 season he was presented with a large frame featuring portraits of 67 Britannia players and officials, by way of thanks for his 10 years of service to the club (he’d not only played but also served on the committee from time to time).

Given his experience, it’s little wonder the fledgling Magpies wanted to bring him into their nest for their debut season in 1892. His experience as a committeeman with Britannia also meant that he was one of four players – ex-Brits Dean, Joyce and Eddie Murphy were the others – who was named as players’ representatives on Collingwood’s committee for that first season.

But while Murphy became an important part of the onfield action, Dean played only four times, and coming into the Round 14 game against St Kilda, Joyce and Duncan hadn’t played at all. That maybe wasn’t particularly surprising in Joyce’s case, as he hadn’t played much in Britannia’s last couple of years. But Duncan had played in 1891 and his experience would surely have been invaluable.

Whatever the reasons, he remained unused – until the new club found themselves desperately short of numbers for the St Kilda clash. Joyce was brought out of retirement to fill in, along with a youngster called Joe O’Brien from what was described as a “fourth rate junior club”. And Jim Duncan was at last given the chance to wear a Collingwood jumper into battle, lining up at full-back. “Duncan, an old Britannia player … will be given a trial, and it is expected he will justify his inclusion,” noted The Herald on the Friday night before the game.

Duncan more than justified his inclusion, and the Pies pulled off an unexpected victory. In fact he did so well that he not only played that game but also kept his place for the next three weeks, each time in the last line of defence.

But that seems to have been the end of James Duncan’s time at Collingwood, and little is known of his movements afterwards, other than him continuing to operate as a “motor bus proprietor”. His brother John, however, would continue carrying the family name at Victoria Park, serving on the Collingwood committee from 1893 for nearly a decade, being awarded Life Membership in 1902.

Jim Duncan was a Britannia stalwart from its first season, and though his Collingwood involvement was brief, he’s one of the few who can claim to have played a significant role in the birth of two clubs.