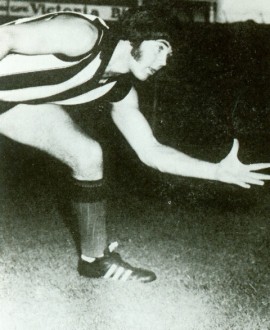 Few, if any, former Collingwood players can claim to have had a bigger influence over the shape of modern West Australian football than John Walker.

Long after his brief VFL career was over, the Magpie one-gamer would find himself running the WAFL and would go on to play a key role in the founding of the West Coast Eagles.

But there were no signs of what was to come when the rugged defender was named on a half-back flank for Collingwood in the opening round of the 1972 season.

Walker had played his junior footy at Doveton, playing in their senior side at 16 and by 17 he’d moved to Dandenong in the VFA. He’d actually signed with the Magpies as a 15-year-old (having also trained with Carlton and Melbourne), but when the VFL introduced country zoning in 1968, Walker found that he lived about 200m inside what had been designated part of Footscray’s country zone. That prevented him from playing with Collingwood’s under-19 side, and caused the Magpies to lose interest.

Walker spent the best part of three seasons with Dandenong, becoming a mainstay of their defence at half-back and a key pillar in their 1971 Premiership side. His performances that year reignited the Magpies’ interest – helped along by Hawthorn sniffing around – and the lifelong Magpie fan was overjoyed when he was invited to Victoria Park for the 1972 season.

These were turbulent times at Collingwood. The infamous 1970 Grand Final fadeout was still fresh in people’s minds, as was the similarly disastrous end to the 1971 season. Bob Rose had quit as coach in the aftermath of that year, the inspirational Des Tuddenham had crossed to Essendon and former skipper Terry Waters would retire just a few games into 1972. Neil Mann took over as coach and, for his very first game in charge, brought in two new players, Rod Oborne on a half-forward flank and John Walker on a half-back flank.

Walker seemed perfectly suited to the hurly burly of VFL footy. He stood around 6’ in the old language and was solidly built. His game was built around a fearless attack on the footy: he was fast, tough and unafraid to run through opponents. He knew how to get the footy though, once he had it, his skills weren’t perhaps at the same level. Still, in a highly skilled Collingwood team that had lost its one true hard man in Tuddy, Walker’s grunt seemed to be exactly what the Magpies needed.

After his selection, The Age wrote: “He has a reputation as a hard hitting defender. He had a good season with Dandenong last year, and in practice games this season has given the Magpies reason to believe he is the type of half-back the club wants.”

So it was that John Walker ran onto the MCG before more than 70,000 fans to make his debut on Easter Monday of 1972, up against the same Richmond team that had knocked the Pies out of the 1971 finals. He lined up on former Tigers skipper Roger Dean (who, true to form, wished him well then belted him at the first opportunity).

Walker grabbed seven disposals and two marks in just over half a game before an ankle injury saw him replaced by Dennis O’Callaghan in the third quarter (the Pies went down by four points). That injury kept him out of the next game, and when he returned to fitness he spent the rest of the year in the reserves, playing 17 games.

He got himself super fit in the off-season, but didn’t feel he was that popular with the coaches and thought opportunities would again be scarce. He was also setting out on what would prove to be a very productive business life, and the money in the VFA was better than what was on offer at Victoria Park. So he headed back to Dandenong with just the one VFL game to his name.

Walker spent one year with the Redlegs, captain-coached Bayswater to an EDFL flag, then returned to Dandenong again as vice-captain in 1975. He then moved to the country as CEO of his first Shire (at just 24 years of age), playing for Wodonga in the Ovens and Murray League. He returned to Melbourne and resumed at Dandenong in 1979 as assistant coach and vice-captain, before heading to WA.

Once in the west, he served in top roles in a number of different companies and local government positions. He ended up as a director at East Perth Football Club, served as CEO of the WAFL and was also the inaugural CEO of the West Coast Eagles, having played a pivotal role in the club’s founding.

Yet despite all those achievements, John Walker says he has always been defined by his one senior game for Collingwood way back in 1972. To which every single Magpie fan would probably say: “Of course”!