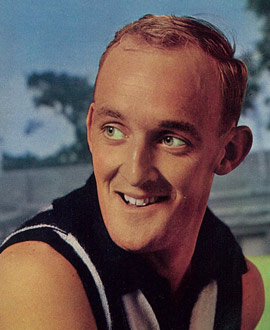 In so many ways, John Henderson was a footballer ahead of his time.

At 187cm (6’ 1” in the old language), and around 90kg (14 stone) he was just about big enough to hold down a key position in the 1960s. But he was also quick and agile enough to play midfield. So his career saw his play in the centre, at half-back and half-forward, in the back pocket and even in the ruck. In the centre he was the prototype of the modern midfielder – big and quick and strong. In defence he became an early version of the running defenders we see so often today. And wherever he played, no matter the role, John Henderson gave the Magpies great service across nearly 150 games.

His journey to the Magpies began at Avenel, though he was born in Seymour. He and famed Essendon strongman ‘Bluey’ Shelton were schoolmates at Seymour High School (indeed they were first and second rovers for the school team before they both experienced growth spurts).

By 15, with no junior teams in the area, John was playing at centre half-forward for the senior Avenel team. He moved to Melbourne to start a career in banking and, while there, tried out at Essendon with the thirds (he was a mad Bombers fan) but couldn’t get noticed. So he turned his back on city football and decided to play again with Avenel, hitchhiking home each Saturday morning after work.

His good performances for Avenel soon alerted Collingwood, and the Magpies invited him down to play practice matches in 1956 – as a full-forward. He did well enough for the club to throw him into the reserves for half a dozen matches during the year, but he had relatively little impact.

It was a different story in 1957, however. That was the year John hit the trifecta – starting in the thirds, progressing to the seconds and eventually making his senior debut on the bench against Geelong in Round 14 (though he only got a run in the last term when he replaced Frank Tuck). The progression continued in 1958, starring with the seconds for most of the season before eventually breaking into the team just three weeks before the finals.

And what an impact he made then! Playing as a ruck-rover he was awarded Brownlow votes in each of his first two games, against Carlton and Richmond. Then, after the Magpies were thrashed by Melbourne in the second semi-final a few weeks later, he was shifted into the centre and starred in both the preliminary final and Grand Final. Just six sensational games after he returned to the seniors, John Henderson was a Premiership player.

That was the start of a wonderful Collingwood career. As previously noted he could play just about anywhere. The centre became his most commonly filled position after his heroics there in 1958, and that’s where he also played in the 1960 and 1964 Grand Finals. But he spent plenty of time in either the back pocket or half-back flank too, especially in the first few years. In some way John actually preferred half-back or the back pocket, where he found his astute reading of the game gave him an advantage over many forwards. He wasn’t a typical defender of the day, often preferring to run off his man and create the play. He was extremely quick (he’d been a decorated athlete at school), a wonderfully sure ball-handler, a good mark and a long clearing kick. He was tenacious and determined and loved a contest. He was also adept at wriggling his way out of trouble in the packs.

“Really pacy for a six-footer,” wrote The Sun, “and can turn and twist smartly too. Has been around a bit – centre, half-back, half-forward and in the ruck – and has played brilliant games in all positions. “He is a most valuable cog in the Magpie machine and has played with distinction in almost every position,” said Footy Fan magazine in 1964. “John’s strength, pace and agility, coupled with his natural ability, have made him a most versatile footballer, and his adaptability has made him a valuable and almost automatic selection in State teams over the past few years.”

John enjoyed some of his best football in the early 1960s, starting out in defence and then returning to the centre where he had starred in his early games. He was runner-up in the Copeland in 1961 and 1964, and third in 1962. He also played for Victorian interstate teams for several years. He enjoyed a particularly good 1964 season, being named in Footy Fan’s Team of the Year, and had a great finals series. He had been named vice-captain that year and took over as skipper early in 1965 after Ray Gabelich relinquished the role. But Des Tuddenham assumed the role in 1966, and while John started the season in brilliant form he was surprisingly dropped late in the year, coming back in for the Grand Final. That turned out to be his last game for the Magpies, after which he spent three years with Yarraville before returning to Avenel for one year, as part of a pact he’d made with Bluey Shelton before they’d started their respective League careers. After that he spent time with Donvale and Wodonga, where he settled.

John Henderson was a near ever-present in the Collingwood teams of the first half of the 1960s, and one of its most consistent and reliable contributors. Along with Ray Gabelich and Kevin Rose, he was within a goal – or a few minutes – of being a triple Premiership player. That’s no more than his efforts would have merited.