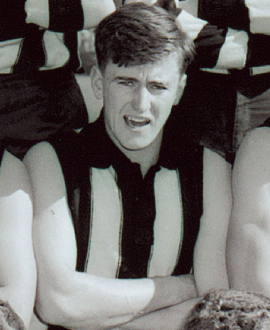 Former Magpie skipper Gordon Hocking was once known as footy’s “smallest big man”, for his outstanding ability to successfully take on much taller opponents. Johnny Mahon, a strong and solid defender from the 1960s, was seemingly cut from similar cloth.

Although he stood only 180cm tall (5’11” in the old language), Mahon most frequently played in one of the two key defensive posts during his 60-game League career. And that meant coming up against many of the best key forwards of his day – most of whom were significantly taller. It says much for Mahon’s physical strength, judgement and reading of the game that he rarely lowered his colours.

John Mahon underwent a long apprenticeship to make it to the top. He was playing with Xavier College in 1956 when the coach suggested he try out with Collingwood. John had a few training runs that year but didn’t seriously have a crack until he joined up with our under-19s in 1957, playing 16 games for the year. He split his time between the thirds and seconds in 1958, but for the next two seasons spent his time entirely with the reserves.

All of which meant he’d amassed 68 games in the lower grades by the time he finally made his senior debut against Geelong in the opening round of the 1961 season (by the time he retired he would have 84 in total).

That’s a healthy grounding in anyone’s language, and it showed in the rapid way Mahon adjusted to life at senior level. He’d won the reserves best and fairest in 1960, as well as representing the VFL Seconds against South Australia the same year. And all that experience proved invaluable as he played 16 games in his debut campaign, and won the Collingwood Rotary Club award for best first year player.

“Supporters have come to know John’s rugged style of play, and his strength is a constant steadying factor on Collingwood’s back-line,” wrote Footy Fan magazine in 1964. “Speed is rated by John as one of his biggest assets – his quickness to position himself, placing long driving kicks well into attack, as well as providing fans with plenty to roar approval about! [He is] a sturdy, robust, hard bumping player who uses his pace to full advantage, an excellent mark and kick, and that makes him an ideal defender”. He just keeps boring in for the ball and no opponent gets an easy kick when he is about,” added The Sun newspaper.

Mahon missed almost all of 1963 with a serious ankle injury but returned to enjoy a career-best season in 1964, culminating in a Grand Final appearance at centre half-back. But he played only eight more games the following year before his Collingwood days ended, after which he went to Prahran in the VFA.

John Mahon had always been a part of the Collingwood fabric, and not just because of his football. His family owned the Yarra Hotel on Johnston Street for many years, and a venue that was already indelibly linked with Magpie history became further embedded with the club when John was playing in the 1960s, with players and fans alike regularly drinking there. It is said that his father, Jack, was a robust publican. Equally, John was a robust key defender – and Collingwood through and through.