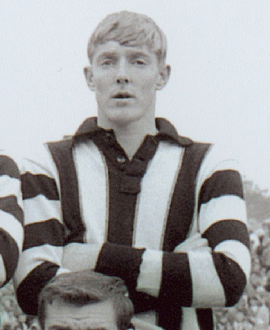 For a player who was seemingly cursed by injuries throughout his Collingwood career, John Murton still seemed to be blessed when it came to winning Premierships. He played in two while with the Magpies – just not at the levels he would have been hoping for.

John arrived at Victoria Park during the 1960 pre-season from Warragul as a 17-year-old, gangly, key position prospect. It was always thought likely that he would need time to develop in the lower grades, and that’s how it turned out. He played 15 games with the under-19s in that first season, with the highlight being his role in the team’s first ever Premiership. He followed up with a further 14 under-19 games in 1961. But he also managed a solitary game with the reserves that year, which set him up for a more serious tilt at things in 1962.

He played 18 games with the seconds that year and kicked 15 goals, mostly playing at centre half-forward with stints in the ruck. It was the role he would play, by and large, for the rest of his career. He was a fine mark and a magnificent drop kick, including having the rare ability to use the kick when shooting for goal. It would serve him well throughout his career, wherever he played.

But he hurt his knee during the last of the 1962 practice matches and battled soreness throughout the rest of the year. It would provide a taste of things to come.

The 1963 season started promisingly, though. After a string of encouraging practice matches, his name was mentioned as one of the candidates to fill the centre half-forward role in the season opener against Richmond. “Murton is a brilliant mark,” wrote The Age, “but may not have the physical strength to be a complete success in the position. He moves to the ball well, has a good leap and sure hands.”

In the end the selectors did not choose him against the Tigers, but he only had to wait another fortnight, named at centre half-forward against Hawthorn at Victoria Park. He kicked two goals that day and was one of the Magpies’ best on a miserable day that saw the home side go down by six goals. The Age noted that Murton was the only player the Pies had in attack that day who seemed capable of “marking well and kicking accurately”.

Murton kicked another goal against St Kilda the following week, and the signs were good. But he had trouble training in the week after the St Kilda game because of ankle soreness, and he was forced out of the team, eventually missing the next month or so.

He was teaching at Moe by this stage, so recovering and making his way back into the team proved harder than it might have otherwise. He also suffered a thigh injury late in the year. He ended up playing only eight reserves games for the year, on top of his two highly promising senior appearances, in what turned out to be an ultimately frustrating season.

But 1964 was even worse. He broke his leg playing a basketball match at Moe early in the year, and while he would play a few more reserves matches, found the constant demands of travel too much. The Magpie initially rejected his request for a transfer to Morwell, but later relented.

By 1965, however, he had returned to teaching in Melbourne, and again threw in his lot with the Magpies. He played very well in the first practice match and was being talked about in the press as a good chance to once again fill the centre half-forward spot. But he injured his ankle in that same game and it was slow to heal, still keeping him on the sidelines more than a month later. He battled injuries throughout a stop-start year and, while he managed 10 reserves games, didn’t appear with the seniors. He ended his year with a good performance in the reserves Grand Final, which led to his second Collingwood Premiership.

That was his last involvement with Collingwood. He was cleared to Yarrawonga for the 1966 season, still with only the two senior games to his name. From there he moved to Cobram, where he taught at Cobram Primary School, immediately becoming a leading player in the Murray League. He assumed the role of playing coach in 1969, leading his charges to a Premiership in his first season and starring in the Grand Final (still at centre half-forward and in the ruck, and still launching those booming drop kicks at goal). He was the club’s leading goalkicker in 1969 and again in 1970, and continued to coach until the end of 1972 season. He became an immensely popular figure in and around Cobram, and the football club would later note that “his attachment to the club and the game, along with an outgoing, friendly, jovial nature led to the creation of many lasting friendships.”

His son, Phil, would later go on to play seven games with Hawthorn in the 1990s, before his career was largely derailed by a broken leg and other injuries. For his father John, briefly a Collingwood big man in the 1960s, that must have seemed a sadly familiar tale.