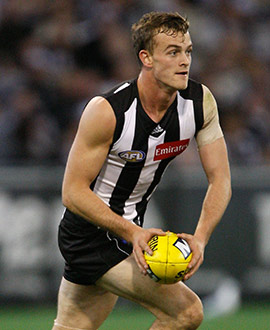 A natural footballer, John McCarthy was forever a game or an injury away from nailing down a regular position in Collingwood’s first choice team during one of the club’s most successful eras.

His wiry frame made him susceptible to injuries, particularly those of the soft tissue variety, but his commitment to the cause and to his mates could never be questioned.

A product of Sorrento via the Dandenong Stingrays, McCarthy was Collingwood’s first selection in the 2007 National Draft. He was taken at pick No. 31 after overcoming the osteitis pubis that dogged him in 2006.

His father, Shane, played for Geelong, as did his older brother Matthew, while uncles Bernie and Gavan played for North Melbourne. His grandfather Alan Olle and great uncle Jack Coffey played for St Kilda, while his cousin, Myles Pitt, played for VFL club Port Melbourne.

An ankle injury restricted his progress on the training track, but he recovered in time to debut for the club’s VFL team against the Northern Bullants in round three at Princes Park.

His early form was promising, and he quickly showed a level of courage that endeared him to his teammates and coaches.

“I suppose that in patches I’m happy, but I still have a lot of work to do,” McCarthy told collingwoodfc.com.au in June.

“I have to be more consistent if I’m going to get a game. I hope I’m a chance for the seniors, but I’ve got to get more consistency in my form.”

His opportunity would come just six weeks later when he and Chris Dawes were blooded against a backdrop of controversy.

The pair replaced senior stars Alan Didak and Heath Shaw who had been suspended for a serious off-field misdemeanour and were to come up against the Preliminary Final-bound St Kilda just a month out from the finals.

“They’re two exciting young players who have perhaps surprised us all with their development over the last few weeks,” coach Mick Malthouse said a day out from the match.

“John McCarthy is a kid who is very dedicated to being a good footballer.”

McCarthy performed credibly on debut, winning 14 disposals, three tackles and kicking a behind in a satisfying 14-point win.

He and Dawes held their place in the senior side for the remainder of the year, featuring in both finals against Adelaide and St Kilda.

McCarthy’s role in the Elimination Final against the Crows was particularly underrated, playing a vital role in locking the ball inside Collingwood’s attacking fifty, and committing his body to a full-length dive to tap the ball out to Shane O’Bree who in turn set up a goal scoring opportunity.

“It was pretty awesome, the boys were so stoked,” he told collingwoodfc.com.au after the match.

“It was great. First final ever and to come away with a win, I couldn’t ask for anything better.

“I have never played in a single final. I haven’t had great luck with teams over the years but it’s going to change this year.”

Unfortunately, season 2009 marked the onset of a series of niggling knee and soft tissue injuries that prevented McCarthy from producing his best football on a regular basis.

He broke into the senior side for the first time in round 22, kicking a goal and rebounding strongly from a vicious Daniel Cross tackle. He held his place for the Qualifying Final against St Kilda but returned to the VFL the following week where he was a member of the team’s Semi-Final win over Williamstown.

“The hammies were the major concern,” he told collingwoodfc.com.au on 15 January, 2010.

“I did two of those so that was annoying. Everything is feeling good at the moment and I am looking forward to a big 2010.”

Things did not turn out as planned, for he managed just two senior appearances (in rounds three and 22) with 11 VFL games dotted between them. His best performance came against Gold Coast in the final home and away game of the year at Victoria Park, collecting 28 disposals and six marks in the midfield. He averaged 26 disposals in his final seven VFL games.

McCarthy very nearly became a premiership player that October, when he was called up as an emergency for the Grand Final Replay victory over St Kilda.

Season 2011 loomed as a make or break year in McCarthy’s tenure as a Magpie.

Putting his injury concerns behind him, McCarthy was a member of the pre-season premiership against Essendon but had to wait until round nine to make his first appearance of the home and away season.

Spending more time in attack, he kicked at least one goal in each of his first four games for the year including two against West Coast in round 10.

Keen for more regular senior opportunities, McCarthy and Collingwood amicably parted ways at the end of the season. After 18 games in four years, the 21-year-old was determined to flourish with more game time.

He trained with Richmond at Punt Road ahead of the pre-season draft but was recruited to Port Adelaide, who was one selection ahead of the Tigers in the order.

Once at Port Adelaide, McCarthy embraced his new opportunity, playing all bar one of his club’s 22 senior games, averaging a career-high 18.67 disposals including 30 against his old club at Docklands in round four.

Seven days after the Power’s final game of the season, tragedy struck.

McCarthy and several teammates had flown to Las Vegas for the team’s post-season holiday.

He fell from the roof of a hotel in Paradise, Nevada, passing away at the age of 22.

McCarthy’s death was keenly felt by the wider football community, and both Collingwood and Port Adelaide took the news hard.

“’J-Mac’ was a great mate to a lot of us. He was a gutsy teammate and wonderful person,” said Collingwood captain Nick Maxwell.

“It’s a terrible day, a devastating day. Everyone here, especially his closest friends, feel for the McCarthy family.”

McCarthy’s old Collingwood teammates were less than a week away from playing in a Semi-Final against West Coast at the MCG, but the game paled into insignificance.

“They will play and honour their old teammate this Saturday night,” said Collingwood President Eddie McGuire.

“To lose a player of his character and his wonderful personality is heartbreaking for all of us.”

The Magpies of 2012 regrouped as best they could and took on the Eagles just five days later, honouring ‘J-Mac’ with a minute’s silence pre-game before overcoming an early four-goal deficit to win an emotion-charged match than none will ever forget.

“He was a great mate of all of us and I hope we did him proud tonight,” Ben Reid told Triple M.

“I couldn’t be more proud of my boys tonight. The way they played in the Black and White was just amazing and to honour a fallen brother was just a gutsy effort and really, really good,” defender Nathan Brown said on Fox Footy.

“It was very draining, but we stuck together and we’ve been as close as we’ve ever been this week as a team and a club.”

“From some Collingwood players, the tears flowed, mostly in mourning,” Greg Baum observed in The Age.

“Uniquely, the mood in the winners’ rooms was as sombre as in the losers’.”

The players and officials travelled to Sorrento for McCarthy’s funeral, 24 hours prior to their Preliminary Final against the Swans in Sydney.

Though they tried, the Magpies understandably lacked their verve of the previous week, but they never once gave up. A final quarter rally brought them close, but the eventual premiers eventually won by 26 points.

McCarthy remains a much-loved figure at Collingwood, and his legacy continues through close friends Jarryd Blair, Nathan Brown, Dayne Beams, Lachlan Keeffe, Ben Reid and Brent Macaffer, who has McCarthy’s nickname tattooed on the inside of his left bicep.