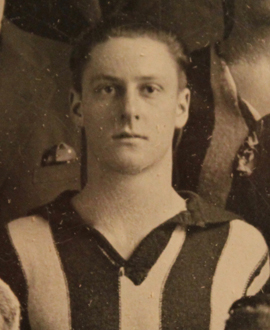 Some players arrive in League football to great fanfare. Others, however, find the experience a little more humbling.

When he made his debut in the third game of the 1933 season against South Melbourne, he only did so because Jack Regan was a late withdrawal. That change caught even the property steward by surprise, so Kent was told to take his jumper to a particular lady in the grandstand – and he sat beside her while she sewed his #15 onto his jumper!

A few minutes later Keith Kent was running out onto Victoria Park for the first of his five senior games with the Magpies. He lined up at full-back, with established key defender Charlie Dibbs moving out to a pocket, and almost immediately made a name for himself.

“Young Kent is doing well,” wrote the Sporting Globe. “He is a fairly safe mark. His weakest point is his kicking, but he is improving rapidly.”

It had been some journey for Kent. Born in Deepdene he had lived in the Collingwood district for a handful of years while at West Melbourne Tech (he was studying engineering and would go on to be a fitter and turner with Victorian Railways), and had made his way to Abbotsford for football purposes. He joined the Collingwood seconds but suffered some serious foot trouble which led the doctor to stop him playing: young Keith went along to a game to watch and found the temptation too great, and was back playing the next week.

The Magpies loved that sort of passion, and gave Kent his chance in 1933. He played his first five games straight, finding himself lining up against such legends as Bob Pratt and Harry Vallence and acquitting himself admirably, keeping both Dibbs and Regan out of the key defensive post. The Herald even noted that the team’s defence had improved since Kent had been given the full-back slot.

He was a fine mark with excellent judgement and a composure under pressure that served him well in the last line of defence. But he was sent back to the seconds after that initial handful of games and just couldn’t regain a senior berth.

Perhaps surprisingly, the selectors ended his stint at Victoria Park early in 1934. He initially tried out with Footscray but after some encouraging early displays there also found opportunities limited and returned to Abbotsford briefly before crossing to Coburg in the VFA mid-season. He spent three seasons there, and had another crack with the Collingwood seconds for part of 1936 (bringing his overall tally of Collingwood Districts games to 36). He tried out with North Melbourne at one stage too, but his heart wasn’t really in it – he loved the Pies too much. He also played plenty of football with the Railways team in the Wednesday league.

In 1937 he was sent to Maryborough with the Railways and the local team snapped him up and gave him a captain-coaching role. He lived in Maryborough for the rest of his life (after a short trip back to Melbourne to marry his fiancée, Merle) and became a deeply valued member of the local community, serving as a fireman, auditor of both the fire brigade and the community brass band and involved in all sorts of local sporting organisations.

By the time Keith Kent passed away in 1999, the whole Maryborough community had good reason to thank the Railways for the job that brought him to the town in 1937. Victoria Park was only one stop along his journey, but he retained a soft spot for the Pies for the rest of his days.