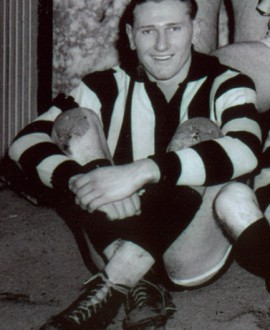 Keith Schow understood better than most the old adage about trying and trying again when not succeeding at the first attempt. And though his persistence was ultimately rewarded, a senior career lasting less than half an hour seemed a cruelly inadequate return.

Keith was born in Queanbeyan in 1930, the son of local football legend George Schow, who was patron of the Queanbeyan Football Club. Keith showed great promise as a youngster and soon developed into one of the finest footballers Queanbeyan has produced. In 1946 he was selected in the Canberra team for the all-Australian football carnival in Melbourne. While there he played at Victoria Park, and resolved to himself that he would return one day to play with Collingwood.

On his return to the ACT he won the Canberra Junior League’s best and fairest in 1947 and 1948, and was still young enough to play for the Canberra under-18s at another national carnival in Brisbane. In 1949 he began playing senior footy with Queanbeyan, and after a successful season there set his sights on the VFL.

He came to Collingwood at his own expense to train with the Magpies. But when he applied to the League for a permit it was refused because he had not fulfilled the three months residential qualification (he missed by only two days!).

The bitterly disappointed youngster returned home and was selected in the Canberra carnival side, then went on to share the Mulrooney Medal for best and fairest in the competition.

He returned to Melbourne in February of 1951 and boarded in Fitzroy – this time determined to make sure he met the three-month limit. In May, with three months behind him, he applied again to the League for his permit. But this time the VFL discovered that (a) his original Form 4 signed with Collingwood had expired a few days before, and (b) he had actually been living in Fitzroy’s zone for the past three months. That combination of factors saw the VFL rule that he was a Fitzroy player!

Keith was devastated, and decided he would return home again rather than play with the Lions. But Collingwood secretary Gordon Carlyon appealed to the Fitzroy committee, and they eventually decided to release their hold on the player.

It was a noble gesture by the Lions, especially considering that Schow looked a very promising player indeed. He spent most of his time in defence, in Canberra playing at full-back and at Collingwood in a back pocket. He was quick (he would later win an intraclub sprint competition) and a brilliant high mark whose aerial abilities belied the fact that he was only 180cm tall. His dashes from defence were a highlight of his game, almost always capped off by the long, driving drop kicks that were his trademark.

Keith spent his first season at Victoria Park in the reserves, underlining his promise by winning that team’s best and fairest award. And he was eventually rewarded for more than a year of consistent performances when he replaced the injured George Hams in the back pocket for the Rd 10 game against South Melbourne at the Lake Oval in 1952. Unfortunately he damaged a thigh muscle early in the game and had to be taken off the ground before quarter-time.

And that, sadly, would be as good as it got for Keith Schow. He took a while to recover, and then couldn’t fight his way back into the seniors. It was the same story in 1953 – injuries and reserves-only football – after which he decided to give up on the dream and return to Queanbeyan. He would vice-captain Canberra in 1955, played two seasons with the Queanbeyan/Acton combined side, then captain-coached the St George club in Sydney before filling a similar role with Queanbeyan and, finally, Turner.

Keith Schow had overcome numerous obstacles – many of them administrative – in his determination to play for Collingwood. After all that, it’d hard not to feel that he was short-changed by a senior career that ended before quarter-time in his one and only game. And even worse, he didn’t get to play at Victoria Park – the ground that had inspired him to dream of a League career while still a schoolboy in Canberra.