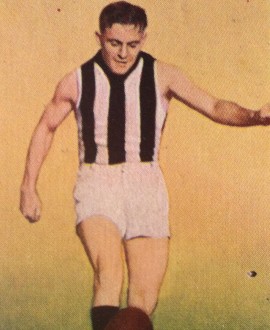 Deep into the final quarter in the 1935 Grand Final, with Collingwood and South Melbourne battling neck and neck, Magpie full-back is heavily concussed and has to leave the field.

These were the days when there was only one player on the bench, to be used in emergency situations only. So when Dibbs, one of the game’s greatest full-backs, was forced from the ground the Pies had no choice but to replace him with their 19thman – a tiny, tough goalsneak in just his third game. It was a long way from being a like-for-like replacement, and not what the Pies needed at that moment. Soon after, however, Keith Stackpole roved a pack intuitively and snapped a vital goal, his first for the club. One kick, one goal, one Premiership medallion.

That cameo, in a nutshell, came to symbolise Keith Stackpole’s career at Collingwood. He was a gifted rover/forward who made a name for himself as an ‘impact player’ off the bench, but who was unfortunate enough to land at Victoria Park in an era of sustained success. In the end, starved of opportunities, he had to leave to fully realise his potential as a top line footballer.

Stacky had been something of a surprise selection on the bench for that ’35 Grand Final. He’d played only two other games in his debut season, and none since Round 13. But the Magpie selectors had obviously seen something they liked in those early showings, and also in his performances for the seconds (where he’d averaged around a goal a game).

He was a tiny 165cm (5ft 5in) but with a nuggety build (he weighed about 67kg, or 10st 8lb), that allowed him to be strong in the contests despite his lack of inches. He was fast, elusive, superb at judging the ball off packs and courageous to a fault. There was no situation into which he wouldn’t throw himself in pursuit of the ball, and he didn’t mind a stoush if one happened. He actually would have survived well in modern football as one of the tough-tackling, gutsy, goal-scoring forwards that coaches seem to love.

The early indications post his 1935 heroics were encouraging. In 1936 he had his most consistent season, playing 11 full games and a further four as reserve. Again, one of those was the Grand Final but this time he didn’t even get on to the field! Still, he had two Premiership medals to show after just 18 senior games, which was a phenomenal return. And he was still only 20, so there was plenty of time for him to cement a more regular place.

Or not, as it turned out. His career at Collingwood stalled after 1936, and he managed only 13 games across the next two seasons – many of them again on the bench – despite a string of good performances for the seconds. It got so crazy that he kicked 11 goals against North Melbourne late in 1938 and still couldn’t crack a senior game the next week! In 1937 he rejected overtures from Essendon to become second rover to Dick Reynolds, but financial as well as football considerations eventually forced him to look elsewhere. After being dropped again after a few games early in 1939, he asked for, and was granted, a clearance to Fitzroy.

He was brilliant at Brunswick Street. Fitzroy improved markedly after his arrival, and the Sporting Globeattributed much of their resurgence to Stacky’s presence, especially his speed and elusiveness. He’d lost none of his goal sense, either, kicking five against Hawthorn and seven against St Kilda in 1941, eventually ending up with a career tally of 229 goals from 128 VFL games. He was also an important part of the Roys’ 1944 Premiership team, then retired and left to coach Prahran.

But Stacky would much have preferred to be turning in those sorts of performances in the black-and-white, for he was Collingwood through and through. He was born and bred in the suburb, attending St Thomas’ in Clifton Hill and excelling at both football and cricket as a youngster. He played with an under-16 team with the Northcote chapter of the Independent Order of Rechabites (which annoyed Keith’s father, a Catholic, who could not abide his son playing with “them bloody Freemasons”), then with their seniors, during which time he won selection in Victorian Rechabite teams. From there he graduated to the rough-and-tumble of the Abbotsford sub-district side — effectively Collingwood’s thirds – before moving on to the seconds, at that stage coached by his uncle, Hughie Thomas.

He was also, of course, a magnificent cricketer – again with Collingwood. He played in the Collingwood District side as a hard-hitting batsman for 20 years, scoring nearly 9000 runs and 15 centuries and becoming one of the most legendary figures in District cricket. He also played for Victoria, scoring a couple of centuries and more than 1000 runs. His son, Keith Jnr, went one better — representing Australia with distinction on many occasions as an opening batsman and later becoming a well-known presence in the media.

Keith Snr remained a larger-than-life figure around Collingwood through the rest of his life, partly through his and his son’s cricketing exploits, but also because he returned to the football club when he became involved in the Collingwood Past Players’ Association early in the 1950s, soon after its formation. He became president of the CPPA in 1966, a post he held until 1990, and did much to ensure the growth and success of that group. A wonderful man who was immensely popular around both clubs, Keith’s name was synonymous with Collingwood.

Ironically, and sadly, the opportunities that had so often been denied to Stacky as a Collingwood footballer, opened up after he left. Many of the small players who had been keeping him out of the seniors left Victoria Park soon after he did. And even though he enjoyed his time with Fitzroy, and had great success there, he couldn’t help but reflect on what might have been. “If I’d stayed another six months I probably would have finished up as first rover at Collingwood,” he ruefully recalled years later.

The words that followed revealed just how much he wished he’d been able to make that happen – and how much Collingwood meant to him. “I had no choice; times were tough, I needed the money and I wanted to be playing in the seniors. But it broke my heart to leave Collingwood, it really did.”