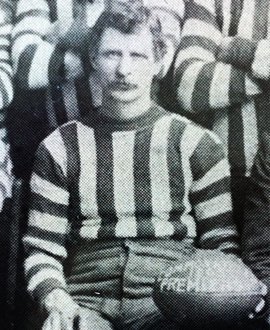 Collingwood’s early captains were an experienced and impressive bunch. Joe Delahunty, named the club’s first skipper, had enjoyed a long career with Britannia and Fitzroy. George Watt, who filled in for the club’s first games when Delahunty was ill, was a giant of Tasmanian football. And Bill Strickland, who took over in 1893, was an ex-Carlton captain who became one of the greatest leaders this club has known.

But there was another Collingwood captain in that period, one who is often overlooked – Ken Macpherson. He held the role for the first five weeks of the 1893 season, before Strickland took over. And while his impact was limited by the time he spent in the job, the fact that he was chosen says much about the high regard in which he was held at Collingwood, and within football generally.


Macpherson was one of the small number of experienced senior footballers who were prepared to take a chance with the new Collingwood club when it started in 1892. His long footballing journey had started in Richmond, where he was born in 1864. After his schooldays he served time as a plasterer under David Mitchell, the father of Dame Nellie Melba, and helped with work on the Melbourne Exhibition Building. He moved to Warrnambool for several years in the mid-1880s, where his exploits as a sportsman won him such local fame that, upon leaving, he was given a “handsome presentation” to mark the high esteem in which he was held.

By this time, he was regarded as one of Victoria’s more prominent footballers and, according to one newspaper, “a star in that branch of sport”. His footballing travels took him from Warrnambool to Britannia to a two-year stint with Fitzroy in 1890-91, where he was described as a ‘shining light’ as a centreman/rover and became renowned for his ability to beat his direct opponent.

So he was a highly experienced, durable campaigner who was just about to turn 28 by the time he made his first appearance for the Pies in round six of 1892 (he would have debuted earlier but the VFA initially refused his clearance request, saying that his reasons for wanting to change clubs were ‘unsatisfactory’). He only played six games in that first season but made an immediate impact, playing mainly as a rover. He was a dashing player – quick, consistent and hard working but always capable of moments of brilliance. At Victoria Park, his experience proved invaluable to his mostly young teammates.

The Pies recognised his leadership qualities when they named him as captain for the early weeks of the 1893 season. He willingly stepped aside when Strickland joined, and continued to play at a high level, not missing a single game throughout the year. He started the year at half-forward, but moved to half-back and stayed there. He played the first four games of 1894, again in defence, before heading to Tasmania with fellow former skipper George Watt, who had decided to return home.

Macpherson made a huge impact in Tasmania. He went to Mt Bischoff, which was the major mine near Zeehan, then the third biggest town in Tasmania (with a thriving mining community and, at one stage, 26 pubs!). He was given a job in the mines and joined Zeehan as captain-coach, becoming arguably the first Victorian footballer to come from the VFA to coach in Tasmania. He later played with Queenstown and Commonwealth, and also starred at cricket (where he was a handy wicketkeeper/batsman) and athletics. On his death, a local newspaper remarked that the trophies he’d garnered from sport would have filled a large table, and noted that he’d left each club he’d played for with “the highest possible record and reputation”.

He became an active and much-loved member of the community, taking a keen interest in local friendly societies, the Druid’s Lodge and becoming a Vice Chief of the Zeehan Caledonian Society.

But sport was Ken Macpherson’s great love. Indeed, he was still keeping wickets for his local side as a 50-year-old in the 1914-15 season. But a year later he was dead, a young victim of ‘miner’s complaint’, or silicosis. Those years working on the mines around Zeehan had cost him dearly.

The impact he’d had on the local community could be gauged by the heartfelt obituary that ran in the local paper, the Zeehan and Dundas Herald, after his death. It read, in part:
” There passed away at the Zeehan District Hospital yesterday morning a man who, in his own sphere and in his own manner, had played a good part as a citizen and sportsman. [Kenneth Macpherson] was born in Melbourne 51 years ago, of good old Scottish stock from whom he imbibed broad ideas concerning the part which men should play in life, and he played it in a manly and admirable way. As a citizen, Kenneth Macpherson was gentle and mutual in essence, kind and helpful in every worthy cause, and broad-minded and generous in action. He was a man of much stability of character, and was trusted, admired and respected by all, while his intimates regarded him with warm appreciation.”

But Ken Macpherson’s contribution to football wasn’t yet finished. One of the six children he left behind, also called Ken, played senior football in Tasmania with New Town, and other descendants did likewise (a great grandson, Rod, played in a premiership with Devonport alongside former Magpie favourite Phil Manassa). That is a great legacy to have left for someone who loved Australian football as much as Ken Macpherson did. Collingwood was lucky to have had him help lead the way in the club’s earliest days.