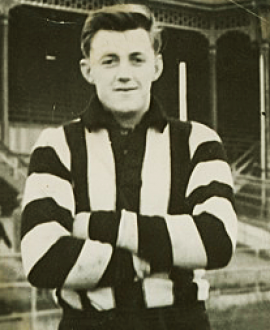 When word first surfaced that VFL clubs were sniffing around Warracknabeal’s Ken Smale, the 19-year-old was described by one newspaper as “the Wimmera League’s John Coleman.” When he finally arrived at Collingwood two years later, the Pies were quick to brand him their best hope as a full-forward since Ron Todd.

So, no pressure then.

And while, in the end, he wasn’t quite able to live up to those early lofty comparisons, it wasn’t for want of trying.

The buzz around Ken Smale’s exploits started in the early 1950s. He topped the Wimmera League’s goalkicking table for three straight years, the first as an 18-year old.

And you could see where the Coleman comparisons came from when Footscray first chased him in 1953. Smale wasn’t as spectacular a mark as the Essendon champ (then again, few were) but he had a good leap and was an excellent grab. He was also finely, but strongly, built and extremely agile. He was good on the lead, a long kick and most of all loved kicking goals. He wasn’t particularly tall, but he seemed perfectly suited to life as a mobile forward who could ‘play tall’. He starred in the key forward posts in the country but it was easy to see that he could have parlayed that into life as a flanker or key in the VFL.

He rebuffed Footscray’s advances in 1953 but the Magpies were able to entice him down in the pre-season to 1955. By this time he was 21 and ready to have a crack. Collingwood selectors saw him in one practice match where he kicked five goals and were convinced: they named him in the senior side for the opening round of the season against, ironically, Footscray.

Smale only kicked a single goal on debut but followed up with more encouraging bags – four, then three, then five. A couple of fallow weeks followed, but that proved to be the least of his problems.

Smale had originally been signed on a six-game permit. When that expired the Pies moved to make the transfer permanent, confidently naming him in the team for the Round 7 game against Fitzroy.

But Warracknabeal surprised everyone by refusing to clear him – even though Smale himself wanted to go. The country club wanted a written assurance from Collingwood that the Pies would release him back to Warracknabeal any time he desired. Collingwood secretary Gordon Carlyon refused, saying that no other player had such an agreement and they wouldn’t make an exception even for one as talented as Smale.

A major standoff ensued. Smale had to be removed from the Collingwood team. He was instead named for Warracknabeal that weekend. But Carlyon made a dramatic, all-night 700km dash to Warracknabeal and back on Friday night and eventually secured the club’s agreement.

Smale, perhaps unsurprisingly, didn’t enjoy his best game that weekend against the Lions. But the Argus was unnecessarily harsh, dismissing the comparisons with Coleman and Todd and describing Smale as a spearhead of “fair average quality”.

He spent much of the rest of 1955 proving the Argus wrong, ending the year as Collingwood’s leading goalkicker with 47, a tally which included a wonderful seven-goal haul against Carlton. It was, in all ways, an encouraging first season.

The Pies certainly thought so. In the first ever club newsletter issued midway through 1955 they wrote:

“In his games with us Ken has shown plenty of speed and judgement in leading out for the ball, he is a safe mark and, although his kicking will improve with practice, he is by no means inaccurate. What Collingwood selectors like about his play is that he is always on the move. He helps to keep the forward line open and even when he is not kicking goals he makes opportunities for his rovers, ruckmen and resting forwards.”

The 1956 season wasn’t quite as smooth sailing, however. Ken was only able to train with the club one night a week at best, doing the rest of his training back at Warracknabeal. And that seemed to take its toll, as he kicked only 20 goals in his first nine games.

He then missed five weeks with a broken hand, and his first few games back were underwhelming. So it wasn’t hugely surprising when he was dropped for the second semi-final against Melbourne. The Pies went down by 16 points, but Smale was recalled for the preliminary final against Footscray the following week as part of a move by selectors to go with a more mobile forward line.

The move worked better than anyone could have hoped for, with the Pies winning by 39 points and Smale jagging a career-best eightgoals. It was a result few had seen coming.

The Agewas damning with faint praise, describing Smale’s game as “surprising” and “confounding”. But Percy Taylor in the Arguswas more effusive. “Ken Smale, the Magpie with glue on his fingers and rockets in his boots, left Footscray shellshocked in the League preliminary final on Saturday. Shocked by his unbeatable leads, his uncanny marks and tracer-bullet accuracy. And this from the man who was discarded by selectors just a week earlier!”

Unfortunately Smale came back to earth the following week, held to just a solitary goal as the Pies were smashed in the grand final. And he never again quite reached the heights of his eight-goal preliminary final wonder game. He did kick six against Carlton in 1957, but only 13 for the year. He managed only five goals from 15 games in 1958, but ended his Collingwood career on the best note possible by being on the bench when the Pies won the 1958 premiership.