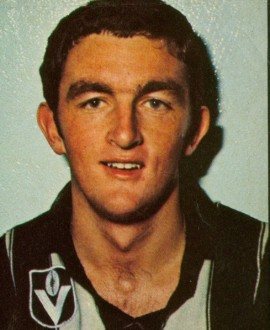 Kerry Foley played his first reserves game for Collingwood in 1971, aged just 17. He played his last in 1978. In the eight seasons bookended by those two games, Foley managed to produce just 11 senior games – and 64 in total in the seconds.

Those raw stats speak to a career that promised much, but which was ultimately one of injury-based frustration. They also speak to Collingwood’s belief that Foley was a potentially special footballer who was worth keeping around, just in case he fulfilled all his early promise.

And that promise was immense. Foley was a star schoolboy footballer when he came to Victoria Park. In his final year at Parade College, 1971, he won not only the school’s best and fairest (in a team that also included Robert Hyde, ‘Gubby’ Allan and Shane Bond), but also local side Bundoora’s B&F as well. This prompted the Magpies to move quickly and bring him straight into the reserves for the last two games of that season (although a corked thigh stopped him from playing the second of those games).

This was a sure sign of Collingwood’s high hopes for the youngster, who was one of those naturally gifted sportsmen who could turn his hand to just about any sport: he was a fine cricketer, good at squash and a wonderful golfer (in 1976 a Collingwood newsletter noted that playing golf with Kerry was a health hazard for those around him because ‘he hits the ball a mile’). He also had football pedigree in the shape of his father Pat, who had played more than 100 games with Preston in the 1950s.

As a footballer, Kerry was ahead of his time. He was tall enough to hold down a key position (he’d played in the ruck at school), and indeed would end up as an outstanding full-back in the VFA. But he was also athletic enough to play on a flank or as a ruck-rover, and versatile enough to pay at either end of the ground.

Wherever he played he was composed and classy, with a lovely pair of hands and a magnificent kick. He oozed class, had plenty of time and composure and always looked like one of those players who was at home on the big stage.

He spent 1972 between the seconds and Under-19s, and eventually got his first taste of senior football against Melbourne in the sixth round of 1973 – but he was forced to sit on the bench for the entire game, even as the team cruised to a comfortable win. Coach Neil Mann sent him back to the seconds to ‘re-earn’ his spot and that’s what he did – after just one week. Unfortunately Kerry’s second game, against Fitzroy, ended with him in hospital with what were initially feared to be broken ribs. It turned out to be just severe bruising, but it was still nasty enough to sideline him for four weeks and curtail any further senior opportunities that year.

The 1974 season was a frustrating experience. Foley spent it entirely in the seconds, and there were those at the club who felt that Neil Mann had, for whatever reason, developed something of a ‘set’ against him. Coincidentally or otherwise, when Mann left and Murray Weideman took over in 1975, Foley played three of the first four games in the seniors. At last he looked like realising his promise. But in the first quarter of the round four game against Geelong he went down with ankle ligaments that were torn so badly he was in plaster for eight weeks. To compound matters the ankle was set badly in the plaster, which prolonged his recovery. He didn’t play again at any level for the rest of the year.

He never really got going again after that. There were five sporadically placed senior games in the club’s disastrous 1976 season (though he was part of the reserves Premiership team that year), and he played his last senior match under new coach Tom Hafey in the first round of 1977. Sent back to the seconds again, Foley injured his knee and ended up missing most of the rest of the year.

Still the Magpies kept him on. But after playing a couple more reserves matches early in 1978, he was cleared to Prahran in the VFA.

He was a huge hit in that competition. Finally blessed with a reasonable injury run, and with coaches who trusted him, Foley quickly blossomed into one of the competition’s best defenders, playing in a Premiership side with the Two Blues in his first season. He made the full-back position his own there, and no lesser full-forward than Port Melbourne’s legendary Fred Cook would later nominate the hard-spoiling Foley as the best full-back he’d faced, saying he felt he’d had a good game if he could manage even four goals against him. He would go on to play more than 100 games with Prahran and be named full-back in their Team of the Century.

Kerry Foley’s celebrated VFA career gave a belated glimpse of what he was capable of. He might never have been able to show his true class with the Magpies, but he still holds a unique place in Magpie history – as the last man to wear the #35 guernsey in senior footy before it passed to Peter Daicos!