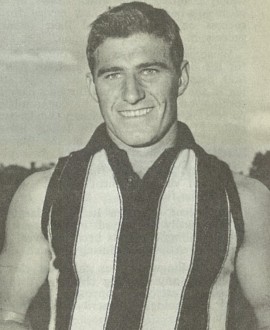 The old days of suburban football, with each club being allocated residential zones from which it could draw its players, meant clubs often had to be quick-thinking when it came to protecting their own assets.

And so it was with Kevin McLean, a mobile high-marking defender who would go on to enjoy a fine career with two VFL clubs. Kevin initially lived in a Collingwood zone, but by the time he was captaining Ivanhoe Grammar in 1960 he had moved into a Hawthorn zone. The following year, while playing with Ivanhoe Amateurs, the Magpies invited him down to play in an under-19s match. He was injured at the time and a little perplexed by the invitation.

But in 1962 it all became clear. By then he had become a real star in the Victorian Amateur Football Association. He made the Victorian amateur team at centre half-forward for an interstate carnival held on the MCG in June, and his performances there were so good that he was selected in the All-Australian Amateur team. Not surprisingly, some VFL clubs began sniffing around, chief among them St Kilda. But the Saints quickly discovered that the solitary game Kevin had played with Collingwood under-19s in 1961 tied him to the Magpies!

Safely secured in a black-and-white guernsey, Kevin made his way to Victoria Park for the 1963 season. And he slotted right in as if he had been there for years. After playing the first four games in the reserves he was elevated to the seniors for the Round 5 game against Melbourne (making his debut on the same day as the great Ted Potter). The Age commented on his brilliant high marking that day and most newspapers named him among the Pies’ best players. “New centre half-back Kevin McLean gave a brilliant performance in a strong team to completely blanket last week’s star Tony Thiessen,” wrote one paper. “McLean is a solid defender who has pace and vigor and he is an excellent mark.”

Kevin was a revelation in that first season. Although he’d made his name as a key forward in the Ammos, he played mostly at centre half-back for the Pies, with fellow newcomer Potter at full-back. He was strongly built and a wonderful mark, and was a shrewd reader of the game. He was good as a close-checking defender but wasn’t afraid to play his own game either. He played every game after his debut, and Footy Fan magazine named him in their recruits’ team of the year. The Magpies felt that they had locked away their key defensive posts for years.

But it didn’t quite turn out that way. Injuries and form hit his performances in 1964, and although he finished runner-up in the reserves best-and-fairest, he would have expected to play more than the eight senior games he added to his tally. He was back in the seniors for the Grand Final, but by then was being trialled at centre half-forward.

It was a similar story in 1965: in and out of the seniors, and thrown between defence and attack, and tried on a half-back flank where he wasn’t ideally suited. It wasn’t easy to settle or to secure a regular place. So it was no great surprise when he crossed to Hawthorn in 1966, where he finished second in the Hawks’ best-and-fairest in his first season, playing in his best position at centre half-back. He quickly became a favourite of the Hawks’ fans and was described as playing “with all the poise of a true champion”.

But his Glenferrie sojourn lasted only two years, and he then spent four seasons with Preston, playing in two Premierships and becoming once again a regular goalkicking forward. But the Bullants were as taken by his ‘club spirit’ as they were by his on-field exploits: he became a players’ rep on the committee in his second season, then later a fully-fledged committeeman and selector.

He then began a lifelong involvement with Old Ivanhoe Grammarians. He had three separate stints coaching the club, led them to three flags, was named the VAFA coach of the year in 1995 and would go on to be named a Legend of the club in 2013. He also coached Warrandyte for four years, for one flag, his sons played there and he would serve three years as President.

Those decades of service to different clubs reveal much about Kevin McLean and his love for football. Collingwood thought it was securing a high-marking forward when it played him in that single under-19s game back in 1961. What they got turned out to be a high-marking defender. But far more importantly, they got someone who would contribute to different football clubs, in different ways, over more than 50 years. In short, a great football person.