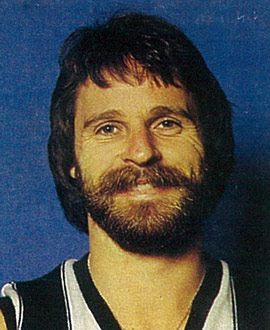 There was never anything pretentious about Kevin Morris – no matter what colours he wore.

As a footballer, he was a ‘what-you-see-is-what-you-get’ kind of player who ran in straight lines regardless of what was coming at him in the opposite direction. As a teammate, he was relied upon to never take a backward step, and his coaches respected him for his adherence to a team-first philosophy.

He wasn’t always refined, although his skills were relatively polished for the time. He was dependable as a half-back flank, or a ruck rover, or as a genuine utility who could slot into a variety of roles required depending on the opposition or the situation. One observer described him as: “Never showy, never driven by egomania, but damn dependable – forever the street fighter fashioned with a touch of class.”

Morris was already a respected, decorated footballer when he came to Victoria Park in 1978, having played in Richmond’s back-to-back premiership sides of 1973-74, and having won the club’s best and fairest award in 1975. He had been recruited from Waverley in the VFA, and would go on to play 111 games and kick 76 goals in yellow and black between 1971 and 1976.

He missed the entire 1977 season with a serious hamstring injury, but a disagreement with several key people around Richmond around that time led to his decision to find a new club. Morris, a full-time publican and part-time footballer, later explained to the Sunday Herald Sun: “I lost my loyalty to the club … after a disagreement with a few people who were telling lies to me, and about me, and trying to interfere in my business arrangements.”

He had actually signed to play with North Melbourne in 1978, but, as the Tigers refused him clearance, the Kangaroos reneged on the deal. That led him to taking legal action, and ultimately to Collingwood. Morris sued the VFL and several Richmond committeemen in an effort to win his footy freedom. He won his clearance outside the Supreme Court when the Tigers blinked, allowing him to drop the case. When the Tigers asked him where he wanted to be traded to, Morris told then Collingwood “because Tom Hafey was there.”

Outside the court, he said: “I will prove my fitness at training on Thursday”, and within six weeks he was playing his first VFL game in black and white – against his former side. Better still, he got the win, after the Magpies overcame a three-goal deficit early in the last term to win by 16 points.

He had a career-high 34 disposals against Fitzroy in his eighth game in black and white. The Agesaid of him after that game: “Hafey said later that Morris was still suspect, but watching him pick up 28 kicks and six hand passes it is hard to imagine him making any significant improvement.”

Wearing No.14, and instantly recognisable by his moustache and sometimes beard, Morris played 16 games in 1978, including three finals, overcoming a slow start to become an important player in the Magpies’ no-frills outfit. He missed 10 games in 1979 with a strained back but returned as a ruck-rover in a role that was important in Collingwood’s run through to the Grand Final against Carlton. He picked up Alex Jesaulenko at the first bounce and went on to have 22 disposals for the game – the equal most with Carlton’s Jim Buckley and Barry Armstrong.

Heartbreakingly, the Magpies would fall five points short as the Blues went on to win the premiership. An image on the final siren shows Morris bending down with his hands on his knees, shattered about how close he came to what would have been a third premiership medal. He was one of only six Collingwood players to stay on the arena to watch Carlton hold up the premiership cup.

More frustration came in the following years. He played 23 games in 1980 – the equal most in a season in his career (alongside his Richmond best and fairest year of 1975) – and again played in a number of different roles. In the Grand Final, Hafey handed Morris the job on his former teammate Kevin Bartlett and stuck with him until almost half-time, by which time the Richmond forward had kicked four of his seven goals. He kicked another three on Stan Magro in the second half. The Magpies lost by 81 points.

Morris played 17 games in the 1981 season (kicking 19 goals in the first nine games of the year), but was overlooked for the Grand Final following the qualifying final loss to Geelong – an omission that hurt him deeply.

That was the end of Kevin Morris’ time at Collingwood, with his four seasons yielding 71 games (12 of them finals) and 53 goals, but sadly no more flags. He would go on to have a long and successful career as a coach and mentor for young footballers. He left Victoria Park to become playing coach of Werribee in 1982. He spent several years as playing coach of Essendon’s reserves team, winning the seconds flag in 1983, and helping to mentor some of the players who won back-to-back senior flags under Kevin Sheedy in 1984-85.

Morris also had assistant coaching, development or recruiting roles at Richmond, St Kilda and Essendon and coached West Adelaide in the SANFL. One of his proudest moments came when his son, Steven, ran out for the first of his 87 games with Richmond in 2012.

But there is no doubt he would have loved a Magpie flag alongside his old mate and mentor, Tommy Hafey. That would have been a more fitting way to end a grand VFL career.