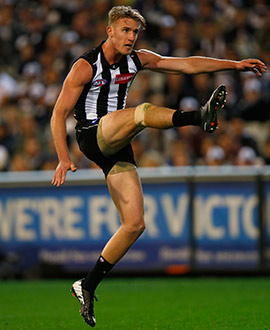 Plucked from a Queensland talent search at the end of 2007, Keeffe had barely touched a Sherrin before walking in the door at Collingwood.

Three years of development culminated in his debut in 2011 and some promising showings at AFL level. A long reach, strong agility and the capacity to play in key position posts at both ends of the ground as well as pinch hit in the ruck meant the Magpies were comfortable investing significant time in his development through the VFL, where he gradually learned his footbal lcraft.

He was one of the success stories of Collingwood’s patchy start to 2012 but was forced to spend twelve months on the sidelines due to a knee reconstruction. He returned midway through 2013 and played the final eight matches at centre half back where he gained experience on the likes of Kurt Tippett and Lance Franklin. An injury-free run enabled Keeffe to play a career-high 18 senior games in 2014, a year in which he featured among the club’s leadership group.

The talented swingman controversially served a two-year league-imposed ban in 2015-2016 alongside teammate Josh Thomas for violating the AFL’s drug code.

He returned in a full capacity from his suspension in February 2017 but, despite his best efforts in the VFL, he was unable to break into the senior side. Keeffe was delisted at season’s end but found a new home at Greater Western Sydney as a delisted free agent.