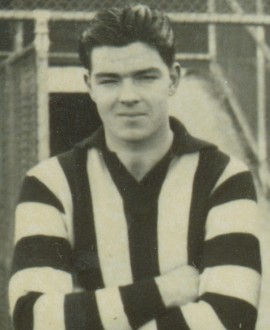 Laurie Rymer arrived at Collingwood as a prodigiously talented 15-year old in 1950. But it took him until 1955 before he finally made his debut – and the League career that followed ended up totalling only 25 games. That was a lower-than-expected return given the initial impact he made at Victoria Park.

Lorance Rymer had been playing with Hastings in the Mornington Peninsula Football League where he started to establish an early reputation, being best on ground as a 14-year-old in the junior league grand final in 1948.

He was a big kid, standing just over six foot tall in the old language and weighing in around 90kg, and it was no surprise he dominated junior football. Even so, legend has it that Collingwood only discovered him while he was playing kick-to-kick with some mates in a park.

Collingwood had no under-19s team when he first landed at Victoria Park, so the club farmed him out to Ivanhoe Amateurs to gain some match experience. He kicked eight goals in the first half of one of his early games before being injured, then followed up with six more the following week. The Magpies quickly got him back to Vic Park for some specialist training with the legendary Phonse Kyne, who was by then the club’s senior coach.

At 15 Laurie was one of the youngest players on any League list. He spent the rest of the year with Ivanhoe, playing mostly at full-forward, and while not quite hitting the heights of those early displays, certainly showed plenty of promise.

Collingwood launched its first under-19 team in 1951, and Rymer was part of that debut intake, playing eight games. The next year he added five more, and also played 10 in the reserves. His progress was steady if not spectacular: the physical advantages he’d enjoyed as a youngster were now being evened up as he played against older opponents, but he was still a good mark, a booming kick and seemed like a decent prospect as either a key forward or follower.

But progress was slow. Fifteen more reserves appearances came in 1953, and then he missed a year through injury. Returning in 1955 he finally made his senior debut, kicking two goals from centre-half forward against Essendon in Round 6. Another two followed a couple of weeks later against Geelong, and the Magpies thought they’d found a handy key forward.

“Collingwood’s new centre half-forward Laurie Rymer fitted into the “machine” as easily as if he had been playing with the Magpies’ senior side for seasons,” wrote the Argus after his debut. “This young, solidly built policeman is a strong and fearless player and a good long kick on the run.”

The first edition of the club’s newsletter in 1955 penned this little ditty:
“Laurie Rymer – a policeman for sure,
Strengthens our forward line – weak before.
He’s fifteen stone and six feet one,
And looks at the end like he’s just begun.”

But Rymer never quite managed to dominate at senior level and couldn’t nail down a regular spot. In 1956 The Sun newspaper summed him up this way: “Big but not over-fast ruckman who keeps trying all the time. Big and strong although he does not use his weight as well as he might. Has been at Collingwood since he was spotted marking and kicking with other 14-year-olds in a park. He was nearly as big then as he is now.”

And therein lay the problem. The passage of time had neutralised his biggest advantage, and while he was named as a ruck-rover in the 1956 Grand Final team, he managed only seven more senior games – for a total of 25 – in 1957 before being released. He’d also played 47 reserves games and 13 in the under-19s. He then crossed to Preston for a couple of years, where he showed he hadn’t lost his ability around the big sticks by topping their goalkicking list in 1958 with 44 goals.