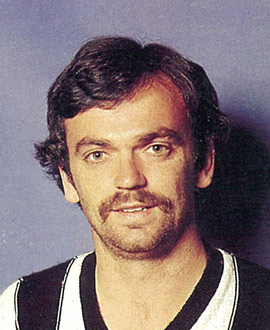 LEIGH Carlson had an unusual week in late May 1981.

In the space of seven days, the highly-skilled wingman with the raking left-foot kick and an uncanny goal sense, played three games – two against the same opponent; and one fora different club entirely.

Sounds strange? It wasn’t for the time, given the VFL’s mid-year transfer window was still open, but Carlson’s predicament was a little more bizarre than most.

He had played his 42nd VFL game for Collingwood in Round 9, 1981, against North Melbourne, then turned out three days later for the Magpies against the Kangaroos again, as part of the Escort Cup night series at Waverley. But on the following Saturday, in Round 10, he played his first game for his new club Fitzroy against Footscray, frustrated by the decision to trade him as part of a deal to get Warwick Irwin to Collingwood, but determined to give as much value as he could to the Lions.

Carlson never complained – he got on with the job, as he had always done in a VFL career that lasted for 117 games and 80 goals and for which he won the admiration  of two sets of teammates for his work ethic, adaptability, good skills and personality.

He had been an exceptionally talented junior football star who once captained the All-Australian schoolboys team. At 15, he was considered “the best (young) prospect in Australia”, according to the Herald newspaper.

But he was slight and his size counted against him in his initial dealings with Collingwood, where he was considered too light to break into the thirds. So he went to Preston in the VFA, playing his first senior game at 15.

“I learnt so much in playing senior football at that age,” he said later. “I probably improved faster than if I had played under-19s (at Collingwood),” he said.

Carlson came to Collingwood’s attention in 1978, having kicked 44 goals as a half-forward in the VFA the year before. He joined the Magpies midway through the year, and after only three reserves games was thrust into a game against North Melbourne at Victoria Park in Round 16. His inclusion for his debut game was overshadowed by the re-emergence of Phil Carman after his brief standoff with coach Tom Hafey.

He kicked a goal that day and played five more in that first season (all in his trademark long sleeves), mostly at wing or half-forward. His best performance came with three goals and 23 disposals in the final round of the season in his maiden game at the MCG. He struggled to break through for regular footy in 1979, playing mostly off the bench, but developed far greater consistency in 1980, when he managed 22 games for the year.

At his best he was a long-striding and damaging player. He was a lovely ball-handler, even in the wet, and a wonderful finisher: he rarely missed shots for goal on the run, and his general field kicking was outstanding. But after the heights of 1980 he again struggled to hold down a regular spot in the Collingwood side, leading to his mid-season transfer to the Lions in 1981.

Collingwood’s pursuit of Fitzroy rover Warwick Irwin had hit a hurdle, when young defender Mark Dreher was reluctant to accept a deal that would see him, and fellow Magpie Des Herbert, plus a substantial sum of money, cross to the Lions.

Carlson ended up being the circuit breaker to the trade.

He, Herbert and schoolboy footballer Matthew McClelland transferred to the Lions, along with $45,000, while Irwin got the chance to switch to Collingwood. The following weekend Carlson turned out for Fitzroy – the team he supported as kid – in the Round 10 clash with Footscray.

Initially he wasn’t happy with how it all transpired, hurt that the Magpies had been prepared to sacrifice him. But he came to accept it, and thrived in his role with the Lions. Irwin, on the other hand, never reached great heights in his 16 games with Collingwood, and ironically ended up back at Fitzroy as a teammate of Carlson in 1983.

Carlson would go on to play 75 games with Fitzroy, and gave the Magpies plenty of reasons to wish they’d never traded him in the first place.

Leigh Carlson never wanted to leave Victoria Park, but circumstances conspired against him. This was one trade that did not work out in Collingwood’s favour.