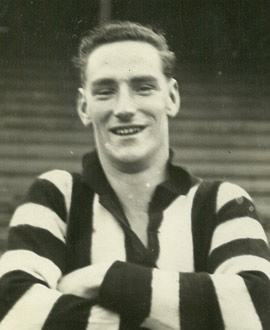 Len Fitzgerald remains one of the youngest men ever to play League football, first pulling on a jumper in the seniors just days before his 16th birthday. He had played more than 90 games with the Magpies before his 21st birthday, and had already won a reputation as one of the most versatile and valuable players in the game. Many likened him to the great Albert Collier.

But at age 20 he stunned the football world by moving to South Australia, where he would go on to win three Magarey Medals. And the worst thing about it all, from a Collingwood supporter’s point of view, is that he did not really want to leave in the first place.

Fitzgerald was a Collingwood boy from the time he toddled out of the crib. He was born in Collingwood, the eldest of three children, and educated at the Gold Street State School and Collingwood Technical School. His father, a labourer during the Depression years, enjoyed his sport, playing cricket and a few games of football with Collingwood seconds.

Young Len quickly showed that he had inherited a natural aptitude for sport, and established himself as an exceptional schoolboy athlete. From the ages of nine to 16 he was virtually unbeatable in schoolboy sprint events. He won the under-10 Victorian 100 yards championship in 1938, beginning a virtually uninterrupted run of under-age titles. He also won the 220 yards (200m) in each of his four years at Collingwood Tech, was a successful cross-country runner and a pretty handy cricketer.

But football was his first love. He had his nose pressed to the Victoria Park pickets almost from the time he could walk. Initially he was unable to get a regular game in his state school team because he did not have a pair of boots, so he paid his best mate sixpence each Saturday to borrow a pair. But at Collingwood Tech he dominated school games so comprehensively that he was regarded as a giant in school sport.

Even then it was clear that a wider stage would soon be needed to accommodate his precocious talents. That stage came via the schoolboy curtain-raisers played at Victoria Park on match days. As with another child prodigy, Des Fothergill, it was these games which provided Fitzgerald with the opportunity to impress the men who counted — the Collingwood selectors. They liked what they saw. Secretary Frank Wraith told The Sporting Globe that he thought the Magpies had found “another Albert Collier”.

He graduated from school football to Collingwood seconds at the age of 15. Despite the heavy burden of the “next Albert Collier” tag, he seemed perfectly at home, playing mostly at centre half-back. So well did he adapt that he was chosen in the senior side for the opening game of 1945 against North Melbourne. He was named on a half-back flank for his debut, but before long had been entrusted with the full-back post.

Fitzgerald played every game that season — a phenomenal achievement for one so young, often holding down such a key position. In 1946, with Marcus Whelan and Jack Regan back in the side, Fitzgerald was moved to wherever the side seemed to have a weakness. He played at centre half-back, centre half-forward, full-forward, in the ruck — he even spent some time as a rover! By year’s end he had been tried in virtually every position bar wing and centre.

That versatility underlined Fitzgerald’s enormous talent. Seemingly, he could do anything and play anywhere. He had an ideal build, standing at 180cm (5ft 11 in) and weighing a solid 86kg (13st 81b), backed by a wide range of finely developed skills. He was a great high mark, a terrific ball-handler on the ground, a driving, accurate long kick and an equally adept short-passer.

He also had lightning-fast reflexes, was beautifully balanced, quick for his size and possessed a sharp football brain, instinctively making good position for the ball. He was a football “natural”, and thought so quickly on the field that he sometimes caught out his own teammates with the speed of his handpasses. He was also immensely strong, and opponents testified that it took a hefty bump to unbalance him. Once set and in position for a mark he was a very hard man to shift.

To top it all off, he was an unusually hard worker on the training track. With these attributes he was a success almost everywhere Collingwood threw him. In 1947 he played outstanding football at centre half-back, but in the next two years became primarily a follower and won interstate selection. During this period Bruce Andrew branded Fitzgerald the most brilliant Magpie big man since Albert Collier, although he lacked ‘Leeter’s’ aggression.

Then, seemingly out of nowhere, on the eve of the 1950 season Fitzgerald dropped the bombshell that he was moving to Adelaide. After leaving school he had gone to work at the Herald and Weekly Times as a message boy, then began an apprenticeship there as a plumber. However he wanted more from his employment, and looked to the club for help: Collingwood offered him a general cleaning/barman-type job in its clubrooms. Fitzgerald then heard of a job going with Myer in Adelaide and took it.

When Sturt heard Fitzie was relocating they moved in quickly. Collingwood, itself in the midst of internal turmoil that season, repeatedly refused to grant him a clearance. Eventually John Wren intervened on his behalf and a compromise was reached. He would play the last few games of 1950 with Collingwood in return for a clearance in 1951.

In 1956 he was lured to Benalla by a lucrative offer to captain-coach the local side. He spent three years there before returning to Sturt, winning his third Magarey in his first year back. He retired midway through 1962 and stayed in South Australia for the rest of his days.

Years later, Fitzgerald still maintained he would not have gone to South Australia if Collingwood had been able to find him the sort of job he wanted. He was Collingwood to the core, and wanted to stay that way. Instead he crossed the border and became a South Australian legend.

Oh that he could have stayed and achieved similar status in his home state, with the club he was born to play for.