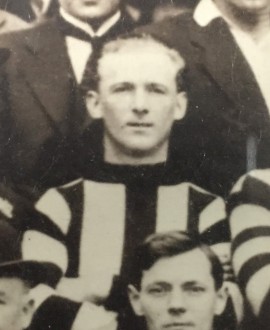 Len Ludbrooke’s time with Collingwood was short and unremarkable; his earlier service to his country was anything but.

Long before he pulled a black and white jumper over his shoulders for four games in 1920-21, his courage and commitment to those around him during a key battle of the First World War earned him a remarkable honour.

In the days and months after the team he would come to play for beat Fitzroy in the 1917 Grand Final, Ludbrooke’s bravery against the odds – and under heavy fire – twice near Ypres, in Belgium, would see him be awarded a Military Medal.

His citation explained that his actions during late September, and again in mid-October, not only saved the lives of many diggers around him, but also provided a remarkable example of coolness under the most extreme pressure imaginable.

The first part said: “This man carried the wounded back under heavy shellfire and rallied his comrades encouraging them to every exertion when their strength was being very heavily taxed. He set a fine example of coolness and courage.”

The second concerned his “conspicuous gallantry and devotion to duty as a stretcher bearer. When the enemy was concentrating a great deal of heavy shell fire upon the area … and causing a lot of casualties, Private Ludbrooke, with great courage, endurance and determination frequently traversed this shell-swept area and brought in wounded until all had been placed under shelter.

“He was thus the means of saving four men who could not help themselves and at the same time leading four others to shelter who otherwise would have been sacrificed.”

Before the award was bestowed on him, Ludbrooke’s actions brought him to attention of the Army Corp Commander, who wished to “express his appreciation of the gallant service shown by this soldier during the recent operations.”

Leonard Cecil Ludbrooke was 21 when he enlisted in the Australian Army in mid-1915, before later transferring to the 13th Field Ambulance. He had shown football prowess before enlisting, but the war meant his sporting ambitions had to be put on hold, as it was for most of his generation. So many of them never got the chance to reach their true potential; fortunately Ludbrooke did.

He worked for his father in a surgical instrument business that specialised in artificial arms, legs, hands and noses. Sadly, it would become a business that would be even more in demand following the horrific injuries suffered by millions during the carnage that was supposed to be the war to end all wars.

Ludbrooke emerged from the war relatively unscathed and returned home in 1919, eager to resume life as it had been before as much as he could. Part of that was resuming his football, and through the 1920 season, he was playing with Ivanhoe.

It was here that he came to the attention of Collingwood scouts and he was brought into the team for his first game with the Magpies in the last game of the 1920 home-and-away season. The 25-year-old had his maiden game in the same forward line as another rookie forward, 18-year-old Gordon Coventry, who was playing his second game.

Coventry kicked three goals in the 17-point win over South Melbourne at Victoria Park; Ludbrooke kicked two of his own. While Coventry retained his spot for the finals, Ludbrooke was overlooked. But he won some compensation after Collingwood had lost the 1920 Grand Final against Richmond, travelling with the team on an end-of-season trip to Adelaide where he represented the club in a challenge game against North Adelaide. He even managed to kick a goal in the game, earning him another shot at VFL football the following year.

Ludbrooke won his chance early in the 1921 season, playing against Melbourne (in Round 2, 1921), Essendon (Round 4, kicking a goal) and Richmond (Round 5). But he could not secure his spot within the team and his VFL career came to an end. His contribution to his country was something more profound, and would sit proudly with him and those who knew him until his death, aged 73, in July 1968.