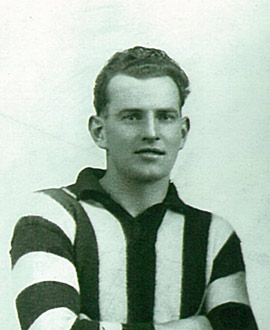 It’s not widely known, but the campaign for Collingwood’s historic 1930 Premiership was very nearly derailed almost before it began.

The Magpies had just beaten Richmond in the opening game of the season at Punt Road Oval. After the game, star centre half-forward Frank Murphy, his younger brother Len and Richmond’s Hope Collins piled into Frank’s motor car to head into the city to go to the theatre (the three lived together and were close friends). But as they were driving along Collins Street they were hit by another vehicle as they crossed Exhibition Street. Slewed round by the force of the impact, Murphy’s car skidded 10 metres across the road and overturned outside the Occidental Hotel. It was severely damaged, and all three men were pinned under the car.

Horrified onlookers rushed to help, convinced that those inside must be seriously injured, or worse. But remarkably they suffered only abrasions and some bruising, and they were back home after a brief hospital visit. Both Murphys missed the next week’s game but were soon back in full harness. And thank goodness they were, for both would prove vital to Collingwood winning its fourth successive Premiership.

In some ways it’s hardly surprising that Len Murphy would walk away from such a dramatic crash with hardly a scratch on him, for he was a seriously tough character. More surprising is that he found a way to use it to his advantage, appearing in ads for Byers & Co tailors later in the year in which he admitted that his escape was “nothing less than miraculous”, with only “Dame Fortune being on the right side that prevented a more serious accident.” “There’s one matter, though, that you can’t leave to chance,” he advised, “and that’s clothes.” He then went on to extol the virtues of suits from Byers & Co.

Full credit to the tailors for establishing a link, however tenuous, between a car crash and a decent suit. Given that Len had only just completed his second season of League football, it says much about the early impact he had that he was chosen for any kind of endorsement deal at all.

Breaking into the Collingwood team in those days wasn’t easy. But Len, one of many to come through Collingwood Tech, found his way. He had played good footy with Williamstown in the VFA in 1927 and was desperate to play with his brother at Victoria Park – so desperate that he first resisted serious overtures and financial inducements from Essendon, then ignored Williamstown’s objections to cross without a clearance and incur disqualification from the VFA.

Murphy’s determination was rewarded when, after a series of strong showings in the practice matches, he was named for the opening game of the 1928 season. His strength, speed and versatility made him a valuable part of Jock McHale’s Machine from day one, and he played in three flags in his first three seasons.

Murphy himself used to readily admit that he was a bit raw and rough around the edges in those early years, but what he lacked in class he more than made up for with aggression and enthusiasm. When the team’s strongest player, Percy Rowe, left at the end of the 1928 season, young Murphy filled a similar role.

Len was a strong, strapping man who stood 188cm (6ft 2in) tall and weighed in around 86kg. He used both weight and height to his advantage, becoming a valuable follower renowned for his long punches from ball-ups but also spending time at both half-back and half-forward with considerable success. In 1934 the Argusdescribed him as “the best half-back in the game”, but he was also dangerous forward and ended his career with more than 100 goals to his name.

Murphy was a good high mark and reasonably able on the ground, but his trademark was long, booming kicks. He had little time for short passing: most of the time he just sank his boot into the ball and hoofed it as far as possible. Even from a standing start he could easily roost it 50 metres-plus, and that was a big advantage. He was also surprisingly swift for a big bloke, and even competed at Ararat and Stawell in the early 1930s. He was often dismissed as a serious footballer because of his lack of polish, but he was good enough to finish equal third in the 1934 Copeland Trophy, second in the 1935 award and represent Victoria twice.

Still, if there was a defining characteristic of Murphy’s approach to the game, it was his aggression. One of his former teammates said Len was “a big, rough bloke who’d just as soon knock you down as look at you”. He took the same approach into his cricket, where he was a tearaway, easily-riled fast bowler and hard-hitting batsman with Collingwood in District cricket. He was a gruff, tough railways worker who enjoyed a drink and liked nothing more than getting amongst it on a Saturday afternoon (although he was also Collingwood’s entrant in a charity dancing competition in 1931!) He was a great protector of the Magpies’ younger players, who all felt a lot safer when Len was around.

Len was also remarkably durable, missing only 19 games in 10 years. Unfortunately, two of those he did miss were Collingwood Premierships. In 1935 he damaged a shoulder early in the preliminary final against Richmond and missed the Grand Final against South Melbourne the following week. He missed out again the next year, too, this time due to an eight-week suspension incurred following a heavy clash with South Melbourne’s Brighton Diggins in the second semi, which left Diggins with a shattered jaw.

There was more pain in the 1937 Grand Final when he was named on the bench – and stayed there for the whole game. Plenty of people felt the Magpies erred in not playing him that day, and Murphy was sufficiently aggrieved to take a coaching job in Nhill for 1938. He then spent 1939 with Oakleigh (having first convinced the VFA to overturn his 10-year-old ban) before returning to Collingwood during the 1940 pre-season. He looked good, too, but finished up at Footscray, where he played 25 games and kicked 30 goals in two seasons.

Len Murphy’s VFL career ended up spanning 14 seasons, and he fell just two games short of the 200-game mark. That’s a hell of a career for a player who was as strong as they come – but so much more besides.