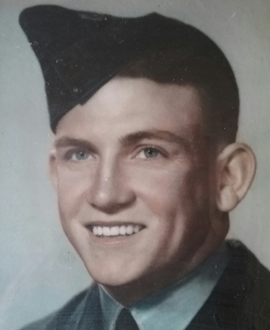 Collingwood suffered badly during the Second World War, and at one stage was struggling so seriously for players that it considered merging with Melbourne.

But the upside to the war years was that we got to see cameos from a number of footballers who played only a few games with the Magpies, such as Leo McPartland.

Leo was born in Shepparton but moved to Western Australia with his family for better farming opportunities in the late 1920s, when he was just eight. He played junior footy with Nedlands and broke into Claremont’s back-to-back premier teams of 1938-39. He attracted particular attention in 1940, playing 15 games and kicking 15 goals in a promising  series of displays.

He played mostly as a half-forward or forward pocket in those early days, but later graduated to a roving berth. He was fast, clever and blessed with good skills.

A member of the RAAF, he was granted a clearance to Victoria in April of 1941, when he trialled unsuccessfully with Fitzroy. One of his four older brothers, Andy (he also had a younger sister and two younger brothers, one of whom died in an accident at 18 months), came across with him and played one game with Essendon in 1941. It took a further two years before Leo got his chance, notching up four games with Collingwood during the 1943 season.

The opportunities came on the back of strong form in the practice matches. After the first of those, The Argus wrote: “McPartland, a Claremont (WA) half-back, has been secured by Collingwood, and on Saturday he showed the Collingwood touch in his play.”

His performances in the pre-season games were good enough to earn him a spot in home-and-away season’s opener against North Melbourne at Victoria Park. Named in a back pocket for the Round 1 contest, the Sporting Globe said he did “a great job”. “Crane, Regan and McPartland, for Collingwood, gave magnificent displays of how backs should clear their territory,” the paper said.

But Leo was injured in the second game against Richmond and didn’t return to the seniors until mid-season, when he finally got a chance in his preferred forward role. Although he kicked a goal in his fourth game, against Hawthorn, it wasn’t enough to keep his spot and he returned to the seconds, where he played seven games for the season. He also played with Laverton’s RAAF team in the services football competition.

But Leo’s connection with footy was fading. He was active in his war service with the RAAF and when that ended he stayed in Melbourne, living in Essendon and becoming a foundation member of the airline TAA. His family say he never really returned to football, preferring instead to focus on his family and professional life, and a love of gardening.

Andy returned to Perth and played for Railways in the Goldfields competition, captaining that team against a visiting Collingwood team in 1946. Another brother, Bert, also played senior football with Claremont before and after the war.

But tragedy befell the family when the third of the talented McPartland brothers, Martin, was accidentally killed when keeping wickets in a country cricket match in WA in 1947. The batsman swung hard to the leg side and struck him heavily on the side of his head. Martin suffered a fractured skull and died on his way to Perth hospital.