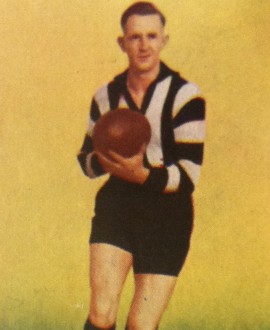 So spare a thought for the smaller, lighter guys who were trying to make their way in those times. And especially for a player regarded as possibly the lightest in the VFL when he started.

That player was Leo Morgan, who stood only 5’6½” (about 169cm) and weighed a paltry 9st8lb (about 60kg) when he entered League football in 1933. But it didn’t even go close to holding him back. Instead he would carve out a fine career, including playing in two Premierships, and go on to serve the club for many years off the field as well.

As a nipper, Leo attended St. Mary’s in Kyneton, and played with them before moving to Melbourne, where he played with North Alphington as a rover for one season. From there he progressed to Abbotsford.

Collingwood called him up to play in some practice matches in 1933 and he did well. After one game, The Age said he was “frequently applauded for his clever manoeuvring and accurate passing from the half-forward flank”. But he spent part of the year with Abbotsford and part with Collingwood Districts (our reserves team), before being given a chance at senior level against South Melbourne in Round 14, age 22, where he was pitted against the West Australian wingman Jack Crowe. According to The Sporting Globe, Leo “more than held his own” in an “auspicious” debut. Still, he was dropped the next week and ended up playing in a Grand Final with Abbotsford.

Leo spent most of 1934 with the reserves and was elevated to the seniors for the last six games of the year, but by 1935 he was a regular. As The Sporting Globe put it: “At Collingwood it does not matter whether a player is big or small, so long as he has football brains. If the latter quality is in evidence a place can be found for him when he survives the test of Jock McHale. The Kyneton boy, Leo Morgan, is possibly the lightest player in the League [but] he makes up for lack of weight by having a superabundance of pluck. He is to be seen mixing it with all and sundry, and his ability as a footballer is undoubted. He employs the punt, and a 60 yards kick is about his average.”

While he had been a rover for most of his career, the Magpies deployed him mostly on a wing. This proved to be a masterstroke, mainly because Leo was seriously quick (he was a pro runner who won a number of events over his career) and the wide open spaces on the wings allowed him to use that speed to great advantage. It also helped insulate his lighter frame from some of the worst of the in-close crunches. Breaking clear in the open spaces of the wings became his trademark, and his long kicks into the forward line were a great supply for key forwards such as Gordon Coventry and later Ron Todd.

He was always good for the odd goal, too, and during an exhibition game against South Melbourne in Brisbane in 1935, kicked five goals in a paralysing burst in the final quarter to snatch the game from the Swans. He was back in more familiar territory on the wing against them in the ’35 Premiership, in what proved to be the most consistent season of his career. He was there again in ’36, but missed eight games in the year through injury.

Leo’s speed and skills were his most obvious attributes. But he was also wonderfully gutsy. In the 1938 semi-final against Footscray, the Magpies were in trouble during the third quarter when Leo hurled himself into the much larger Alby Morrison. He was flattened in the process, but club president Harry Curtis singled Morgan out for praise after the match, saying his actions had shown his teammates that “it was time to become busy”.

“Collingwood was shocked into action by the little fellow’s lone effort to stem the tide,” wrote The Sporting Globe later, “and the whole team rose as one man to swamp Footscray. If any Collingwood barrackers have doubted the wisdom of playing Morgan, who has not shown consistently outstanding form throughout the season, there is the answer. A footballer who has thereafter the power to give of his best when the whips are cracking can never be dropped from any team.”

Leo’s light build did work against him a little in the back half of the decade. He missed more games through injury than he would have liked, and ended up playing more games with the seconds as he frequently returned from injury. In the end he never managed a full season in the seniors: 16 games in 1935 and 15 in 1940 were as close as he got.

By then he was nearing the end of his career, and that moment was accelerated when he joined the RAAF. He played a few games early in 1941 and served with the Air Force until mid-1944. Occasionally, on trips home, he would turn out with the reserves. He’d also been a top cricketer in his day, on top of his foot-running exploits, and worked at the Abbotsford Brewery.

But his time at Collingwood was far from over. He stood for the Committee pretty much as soon as he returned from War service, and was elected at his first attempt in 1945. He would go on to serve in that capacity for 17 years, including a stint as vice president. He was also involved in recruiting and scouting for many years, and as a selector, in which roles he was well served by the ‘football brain’ which the Sporting Globe had remarked on all those years before.

Leo Morgan might have been a small man but his contribution to Collingwood – both on and off the field – was huge.