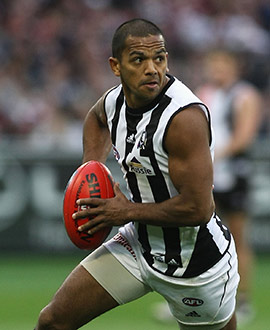 Although he didn’t enjoy the nickname “Neon Leon”, Davis was an instant hit with Collingwood fans in his debut season.

Originally from Perth, Davis was likened to Melbourne star Jeff Farmer, with twinkling feet producing excellent evasive skills and during 1999 he progressed from the Perth Under-18s to the senior side where he played mostly on the wing.

Once recruited to Collingwood, Davis was initially to be given time to develop, but his potential meant that he made his debut as early as round one, from the interchange bench.

Davis’ truly electrifying pace soon captured everyone’s attention and he showed flashes of sheer brilliance in his 15 senior games, which were mainly on a forward flank or on a wing.

He retained a senior place in the Collingwood throughout 2001 even though he was used sparingly off the bench in the first half of the year.

He booted 31 goals in 2002, but still needed to lift his possession rate. He had a barren Grand Final when he did not gather a possession and said later that he thought back to that day whenever he believed he had to work harder. He did not seek excuses even though he played the finals series with stress fractures in the leg.

He struggled early in 2003 and it was reported that family health problems were weighing him down. He spent almost three months in the reserves and returned for the Preliminary Final and Grand Final and gave a better account of himself.

In 2004 he started to show the form expected of him late in the year.

Davis was a prominent part of the Magpies’ early thrust in 2006, but his season ended when he badly injured an ankle late in the year.

By 2007 he had become a much more confident footballer than the shy youngster who arrived at the club at the beginning of the Mick Malthouse era. He ran ninth in the best and fairest and came fourth the following year.

He oozed confidence in 2009 and told of his almost world weary celebratory gestures that it was to “act like you kick them every day of the week”. He was an All-Australian selection in 2009, but again had a quiet finals series.

In 2010 Collingwood reverted to using him as a deep forward and he often struggled despite the team’s success. Recalled for the Grand Final, he lost his place for the Replay despite kicking one of the most important goals of the day, midway through the final quarter.

Switched to half back in 2011, he enjoyed a fine season and was chosen as All-Australian before playing in another Grand Final.

Davis retired shortly after the 2011 Copeland Trophy Dinner, farewelling the game at the age of 30 and still well and truly at the top of his game.