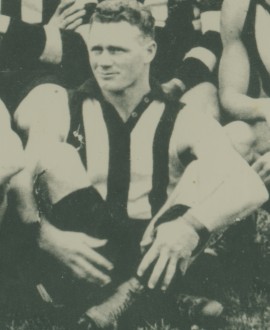 Most people know that the Depression of the late 1920s and 1930s had a huge impact on the football world. It affected crowds, it affected clubs and it affected players – many of whom were forced to end careers and shift clubs, sometimes even states, in order to chase work.

Less well remembered is the impact of another disaster that preceded the Depression – a crippling, long-running drought that hit hard in country Victoria. Families suffered badly and many farms were lost. And the effects were even felt at Victoria Park, because the drought cost Collingwood one of its most promising young players.

Les Angus was welcomed particularly warmly when he arrived at Collingwood in 1928 from Tresco-Lake Boga (near Swan Hill), because he was the son of former skipper George Angus, who led the team in its memorable 1910 Premiership success over Carlton. George died in 1917, aged just 42, from a brain tumour.

Les was a prodigiously talented sportsman – an outstanding Country Week cricketer (the competition through which he met his future wife, Ruth, when she was scoring for a rival team), good at tennis and a strongly built, skilled footballer. He played mainly on the wing or at half-forward, where his speed and strength could be fully utilised. It speaks volumes for his talents that he was able to break into a Collingwood Premiership side and play nine games in his first season, narrowly missing a spot in the Grand Final team. The Sporting Globe predicted a bright future for him after his debut game, saying he’d performed well and would “doubtless develop into a very fine footballer”.

Sadly, the football world never got the chance to find out. Les Angus was forced to return to Lake Boga before the year was out to try to save the family farm (a citrus and vine operation), and stayed on to continue the battle into the following year. Unfortunately the fight was not successful and the family were forced to leave their land and their home. Les again stayed on as the rebuilding began, and his shot at a VFL career was over.

Les’s son, Geoff, continued the family footballing tradition when he played 70-odd games with Hawthorn in the 1970s. He says his Dad was too unassuming to talk much about “what might have been” with his career, but loved talking about the great players he’d teamed with during his brief stint at Victoria Park. He would recall how good they were to play with – how if you were in trouble you could just about kick the ball anywhere, because there was a fair chance it would land near an out-and-out champion. Only fate denied Les Angus the chance to find out if he could have played a bigger part in the successes those champions enjoyed.

This profile also appeared in The Machine, by Glenn McFarlane and Michael Roberts.