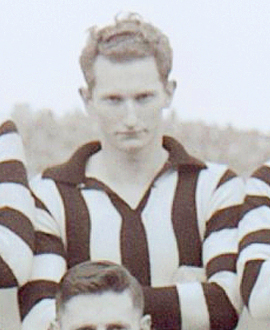 Les Thompson was born in Korumburra in 1928 and played school football before playing for the Korumburra senior football team in 1945 at the age of 17.

Bob Makeham, a four-time premiership player at Collingwood and the local hotelier, saw Les play and was so impressed he decided to write a letter of introduction for Les to train at Victoria Park.

Les and his family moved to Johnson St, Collingwood in 1945 and he started playing reserves football for the club soon after. The Pies gave the youngster plenty of time to acclimatise, and he’d racked up nearly 50 reserves games by the time he finally made his senior debut in round two of 1949 at the age of 20.

At that time everything seemed to be pointing towards a promising senior career. He’d won the reserves best and fairest award in 1948, having received his trophy at a packed Collingwood Town Hall at the end of the season. He played mostly on a half-back flank or at half-forward, where his great pace and accurate kicking could be used to best advantage.

He played eight senior games (and eight more in the reserves) in 1949 without quite making a senior spot his own. But injuries began to take their toll and his VFL career didn’t have long to run. He was married early in 1950 and started a professional career, just as his stint with Collingwood was coming to an end. His final tally was nine senior games, together with 58 reserves games over six seasons, including finals played on the MCG. He was cleared to Hawthorn midway through the 1950 season but didn’t play a senior game there.

With injuries and a slight frame, Les’ time at the senior level was all too brief. But he never lost his love for the game, and continued to play at the lower levels until his thirties.