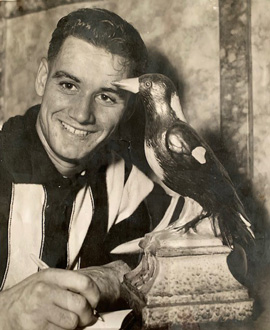 It’s the 27th of April, 1957, and Lloyd Williams must have been feeling on top of the world.

Just months before he’d been playing his football with Ivanhoe Amateurs. But now he stood in the changerooms at the MCG, wearing a Collingwood guernsey, about to run onto the field to take on Norm Smith’s mighty Melbourne in a replay of the previous year’s Grand Final. He was 22, the reigning Ivanhoe best and fairest, just about to play his second game of VFL football and on the verge of his peak years as a sportsman.

But little more than an hour later, his career was over. A freak and horrific injury, followed by a staggering chain of post-injury events, ended a highly promising career before it had really got off the ground.

It was a cruel end to what was shaping as something of a fairytale story. Lloyd grew up in West Heidelberg, then moved to Ivanhoe and played in the Amateurs’ 1953 under-19 premiership team. By 1956 he was one of the stars of the Amateur competition. He won Ivanhoe’s best and fairest that year and played centre half-back in what turned out to be the club’s only A Grade Premiership.

But perhaps the greatest highlight of all that year was when he was chosen to play in a Victorian Amateur Football Association representative team which played an exhibition match at the Melbourne Olympics against a combined VFL/VFA team (the Ammos won).

Lloyd played on a half-back flank that day, and Collingwood selectors liked what they saw. So they invited him down to pre-season training ahead of the 1957 season. It wasn’t his first crack at a VFL pre-season: he’d gone to Fitzroy at the beginning of 1956 but hated the place and couldn’t wait to get back to Ivanhoe.

Collingwood, however, was a different matter entirely. He felt welcomed there, and his performances on the track were so good that he was thrown straight into the first senior practice game. And over the next four weeks, he turned heads every time he took the field, initially across half-back and then later when thrown into the ruck as a follower.

“Lloyd Williams is another representative of Ivanhoe Amateurs who has impressed by his training at Collingwood,” said the club’s first practice match record. “Lloyd is 22, 5’11” and 13, plays in the half-back position and performed well for the amateur association in the exhibition match at the Olympic Games.”

He was named among the best players in each of the practice matches, and “continued to impress with his courageous and tenacious play.” “Lloyd Williams set an example that reminded onlookers forcibly of some of the old style Magpie ruckmen,” noted The Age. “He proved a rugged, capable follower of unlimited potential.”

After such impressive displays, it was no surprise when he was chosen for the first game of the season against Essendon.

At Ivanhoe, Lloyd had played mostly at centre half-back but regularly gave away inches to his opponents. He was tough, strong and determined, with good hands and great judgement of when to go for marks and when to spoil. It was always likely that he wouldn’t be tall enough to hold down a key position at VFL level, so the Pies slotted him in on the half-back flank.

But that was no mean feat in itself. Collingwood at that time had one of the game’s most famous defensive lines – Peter Lucas, Ron Kingston and Frank Tuck. In order to accommodate Lloyd, they shifted Kingo to full-back.

Lloyd never thought he played well in his first game, but others disagreed and he was named amongst the best players in some newspapers. He started brilliantly in the Grand Final rematch against the Demons the next week, beginning as a follower before moving into defence. So well did he play that many newspapers named him amongst the best three players on the ground, and the Magpies named him their best player internally. Remarkably, those votes came from less than three quarters of football because late in the third quarter, according to The Age, he broke both the tibia and fibula in his right leg when he fell over Melbourne forward Ben Crameri. And that was just the start of his problems.

He was left lying in agony on the MCG for 12 minutes as it became apparent that the Melbourne Football Club had forgotten to provide the stretcher they were meant to have available as the home team. Lloyd lay on the ground for most of the three-quarter time interval, covered by a rug brought onto the ground by a small boy in a Collingwood jumper. He was treated by a doctor as the search for a stretcher went on, while incensed Magpie coach Phonse Kyne left the huddle to have strong words with Demon officials.

Eventually, Collingwood trainers ran onto the ground carrying a wooden rubbing down table from their own change rooms, and Lloyd was placed on that before being rushed to the Alfred Hospital.

The Demons later apologised, saying the stretcher had been overlooked in their move to new dressing rooms. But that didn’t make up for what Lloyd Williams had endured. And what followed only made it worse.

It was immediately obvious that Williams would miss the rest of 1957. His leg was placed in plaster, supported by irons, and the longer his leg stayed that way the more it withered. He tried to come back in 1958 but didn’t even get close. Late that year, a different doctor tried additional X-rays from a different angle: they showed that the break had never fully healed in the first place. So the doctor took some bone from his shin to cover over the break that hadn’t healed, then added a screw. It kept his leg together for the rest of his life, but it was never strong enough to play football again, although he made ultimately futile attempts at a comeback in 1960.

The Magpies had launched an appeal in Williams’ name after the initial incident. They considered him the best of the club’s recruits for 1957 and were distraught that his season – and, as it turned out, his career – had been cut short. The fans, too, rallied behind the youngster, and more than 500 pounds was raised in quick time – a staggering sum for the time and a sign of how highly rated he had become at Victoria Park.

But nothing could undo the physical damage, and Lloyd’s playing career ended that day at the MCG. He returned to coach Ivanhoe in 1965, taking the club from B Grade to A Grade and establishing a reputation as a hard but fair coach. He was the main instigator in the formation of two Ivanhoe junior teams (under 15s and 17s) in the Melbourne Boys League, and later coached Heidelberg in the Diamond Valley League. A textile dyer by trade, he set up a new business in Geelong that proved to be very successful. While living there he coached Geelong under-19s, playing an important role in developing the club’s younger players. He would go on to be chosen at centre half-back in Ivanhoe’s Team of the Century.

Lloyd Williams had so much football in front of him before the accident. And even the broken leg need not have stopped him: he was such a strong and determined character that he, more than most, could still have mounted a comeback. Any chance of that, however, was scuppered by the missed damage to his leg, and resultant false starts. In the end he remains an Ivanhoe great, but fate denied him the chance for anything close to similar status at Victoria Park.