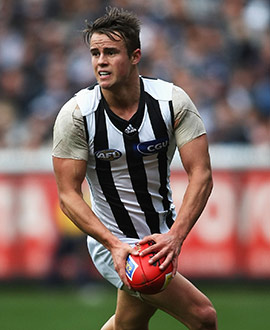 After two years in the system, Rounds had a well-earned taste of senior football in 2011 but after appearing against Hawthorn in the first round of the Nathan Buckley era, he returned to the VFL and left the club at season’s end.

He played all over the ground in his four seasons on the list, but played his best football as a half forward in the VFL in 2010. Rounds was employed as a tagger when in the senior side, and always showed discipline, with strong tackling complementing his goal sense.

Rounds played for the Geelong Falcons in the TAC Cup Under 16s in 2007 and represented Vic Country at the Under 16 National Championships.

Twelve months later, Rounds played for the Falcons at Under 18 level, and Vic Country at the National Championships.

He tested well at the AFL state screening session (2.84sec over 20m and 14.7 beep test) and was drafted to Collingwood with pick No. 46 at the National Draft as a bottom-age player The selection had been traded by Sydney in exchange for Rhyce Shaw.

At Collingwood, he joined his cousin Luke Beveridge, who began as a development coach at the club in 2009.

Rounds spent his first season in the VFL, playing 19 games and kicking seven goals while splitting his time between attack and defence.

His coach Gavin Brown labelled his game against Frankston in round 12 a “breakout game” for Rounds, who had 20 disposals and seven tackles. Brown called his counter defensive work “exceptional”.

In 2010, he was again forced to bide his time in the VFL despite hitting a rich vein of form at half forward midway through the season. He kicked 22 goals in 15 games, and was named as an emergency on five occasions.

Rounds was an emergency for the round 14 match against West Coast, but in what represented a sliding doors moment in two careers, the match committee opted for Jarryd Blair to replace Steele Sidebottom at the last minute. Rounds was named as Collingwood’s second best that afternoon with three goals in the loss to North Ballarat at Victoria Park.

Blair went on to play in the premiership side, while Rounds continued to impress in the VFL.

He entered 2011 intent on a senior debut, but was forced to wait until round 15 against Hawthorn. He began the match as the substitute and only entered the fray in the final quarter, winning four disposals. He held his place for the next fortnight, tagging North Melbourne’s Brent Harvey in his second match.

Rounds’ best effort came in the wet against Port Adelaide in round 20, where he gathered 14 possessions and added the first goal of his career to his seven tackles. He was omitted a week later and narrowly missed the boat on finals selection.

He played 12 VFL matches in total, and was named in the best five times, and booted four goals.

After spending much of the pre-season and the first round of the season proper in the senior side, Rounds returned to the VFL where he remained a reliable contributor under Tarkyn Lockyer before being delisted at year’s end.

He spent time with Port Melbourne in early 2013 before shifting his focus back to local football.