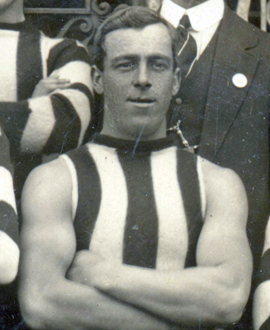 Few figures in the history of the Collingwood Football Club have ever done more to earn the tag ‘great Collingwood man’ than Malcolm ‘Doc’ Seddon.

He was a local lad who became an outstanding player, committeeman and chairman of selectors at the football club he served for the best part of 30 years, while also rising to be Mayor of the municipality. And, of course, he also served his country and represented his club with distinction on the battlefields of Europe.

It all started when Malcolm was born – one of eleven children – in Liverpool Street Collingwood (where the train station now stands). He went to school at the Victoria Park State School, just across the road from Victoria Park, and was obsessed with sport from a young age. He was an outstanding cricketer, playing district-level cricket with Collingwood and also a Collingwood Footballers’ side, but an even better footballer.

He was invited to train with the Pies in 1911, but only broke through into the seniors late in the year. He managed only 11 games across his first two seasons, but the Pies kept faith in the strongly built big man and were rewarded when he found his feet at the top level in 1913, establishing himself as one of the better followers in the competition and even winning selection for Victoria against Ballarat.

He was a big, square- shouldered man who often acted as the team’s protector. His aggressive approach to football, especially early in his career, sometimes attracted criticism from the media, and one cartoonist used to depict him ‘preparing’ for a big game by sharpening his elbows on a grindstone. But his teammates loved him for the hard work he put in acting as a ‘shield’ for the tap ruckman, covering a lot of ground and taking a fair old buffeting in the process (luckily he was a fitness fanatic who did not drink). He was also a very smart player, a fine mark and an outstanding long kick.

His teammates – and, later, his mates at the Front – also loved him for the type of person he was: kind and warm, though reserved, fiercely loyal and with a strong belief in the merits of sticking by your mates.

In 1915, he enlisted to join the AIF with his closest mate, Paddy Rowan, who had started at Collingwood the same year as Doc. His status at Collingwood grew in his absence, at least partly because of the letters and mementos he sent back from the Front.

Most famously he sent back a horseshoe, fashioned under fire from parts of a German shell and aeroplane. With it he sent a letter hoping that the horseshoe would bring his teammates luck in the 1917 finals (it worked – the Pies won the flag that year). He also sent a similar horseshoe to his mother, and a couple of the hard tack biscuits the soldiers used to eat. All of these are still on display at the Collingwood Football Club today, and the 1917 horseshoe forms an important part of the club’s Anzac Day preparations each year.

In one of his letters back, he gave a brief insight into the hell he and his fellow soldiers were enduring:

“Well, old man, a chap is among it over here all right,” he wrote. “You are alive one minute, God alone knows where you will be the next. Poor old Buff Huntley got blown out here yesterday. I was speaking to him only a short while before, and he was complaining of his ankle, but, poor fellow, his ankle will trouble him no more.

“The boys were asking me to send them something over for a keepsake. I will only be too pleased, but they will have to wait until we get out of this, for the only things I could send them from here would be some of Fritz’s shells or some Huns’ heads. I will have to close up as it is getting late, and Fritz is sending some big stuff over.”

Unlike his great mate Rowan, Doc survived the First World War. He came back in 1919 and resumed playing almost immediately, taking a spot in the side for the flag that year and winning further Victorian selection the next year. Even after his years at the Front, and having been gassed, he remained super-fit and relished the hard work at every training session. He eventually retired at the end of 1921, age 33.

But his contribution to Collingwood didn’t stop there. He immediately assumed a spot on the committee, became the chairman of selectors and also played a major role in the organisation of the schoolboy curtain-raiser games that began in the 1930s. He got caught up in an internal political squabble in 1939 and lost his place on the committee, but continued to serve the wider Collingwood community while a local Councillor, and he also spent one term as Mayor. He also had a stroke of good luck when he won £10,000 in a Tatts lottery in 1942.

Nobody begrudged him that good fortune. It is now well known how, upon his return from the War, Doc fulfilled a promise he’d made to Paddy Rowan and helped his widow, Louise, to raise the son Paddy had never seen. It was actually Doc who had introduced Paddy and Louise, as Louise had grown up in the same suburban Collingwood street as Doc and had been a good childhood friend. Now, as adults, and bonded by grief, they found that their relationship changed. Over the years, they fell in love and eventually married, having two further children of their own.

That is the most famous part of the Doc Seddon story. But we shouldn’t forget his qualities as a footballer, his involvement in two Premierships – the first with his ‘good luck’ horseshoe from the Front, the second as a player – and his great overall contribution to the Collingwood Football Club and the local community.