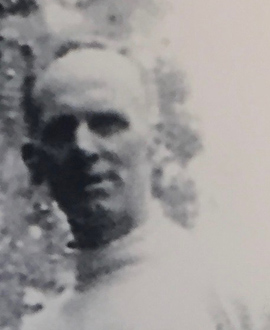 It’s one of the peculiarities of football in the 1890s that players could be snapped up from local clubs by just about any senior team at any time. Which sometimes meant an in-demand player being chosen by more than one club at the same time.

And that’s exactly what happened with Horace ‘Ozzie’ Mann. He had been starring with Port Imperials as a young captain for a couple of seasons when, late in 1893, he agreed to turn out for Collingwood. Unfortunately he soon afterwards made a similar undertaking to South Melbourne. Indeed, on the Friday night before his proposed debut, he actually went to a theatre party with his soon-to-be South teammates.

But then he had a change of heart. And while South delayed the start of their game by several minutes while they waited for him to turn up, across town Ozzie was pulling on the black-and-white jumper for the first time against Richmond.

The Southeners would obviously not have been happy, but others were impressed. “Mann, who promised to play with Collingwood first, and not South, kept his promise,” noted the Sportsman. “Good, Mann.”

South would have been even more upset when they read the reports of Mann’s first game with the Magpies. The Herald said he played “a real ding dong game first up”. “The Magpies reckon they got a good player in Mann. He showed fine form at times last Saturday.” The Australasian agreed: “Mann, who appeared for the first time as a senior, distinguished himself by annexing the first goal as well as in the taking of more than one rattling high mark during the encounter.”

Horace Henry “Ozzie” Mann was born in Sandhurst and was only an infant when the family moved to Port Melbourne. At age 17 he was playing for a newly formed club called Port Melbourne Imperials, in the Metropolitan Junior Competition. He was a reliable goal kicker in his first two years and regularly named amongst the team’s best players.

In 1891, at the age of just 18, Mann was named captain of the Imps. In September that year the Port Melbourne Standard reported on their AGM, where they celebrated an unbeaten season. “H. Mann, the genial skipper, [was] congratulated for the proud position the team has obtained. Lead ’em on ‘Hos’,” the paper said.

He captained the team again in 1892, including in one game against Collingwood Imperials, and kicked six goals for the season as his team struggled. In 1893 he was captain again (as well as vice-president) and starred through much of the season. He was regularly singled out for his brilliant play, kicked a number of goals (including three in one game, a fine effort in those low-scoring times) and was also chosen in a ‘combined juniors’ team at the start of the year. After another fine performance against Collingwood Imps, the senior Magpies moved to give him a try. And though South soon followed suit, he’d already said yes to us and lined up for Collingwood seniors against Richmond on 26 August 1893. He was named as a rover that day (also in the team was another newcomer from Port Imps named Buckley: but he lasted only two games).

Mann played the last five games of the 1893 season, all of them as either a rover or on the half-forward flank. He was mentioned positively in match reports and several times named amongst the best players. But he then seems to disappear from football records, and nothing is known of his playing exploits from that time on. His mother died in 1897 and his father also passed in 1902 before he was married in 1903 at age 31. He was employed as a meter repairer and maybe the pressure of earning income for his family overruled his football ambitions.

He had a meter manufacturing business in a factory in Brunswick and lived in South Melbourne before settling into his forever home in Coburg. Later in life he was the Proprietor of the Loyalty Business Shirt Manufacturing Company and director of various manufacturing companies.

So Ozzie Mann remains something of a mystery. He was clearly a talented footballer, but exactly why his Collingwood career – and maybe his whole football career – ended so abruptly may never be known.