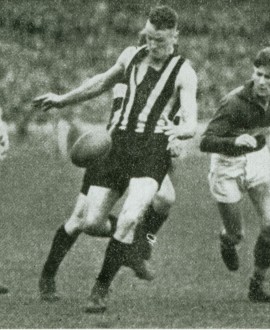 Some players make their mark in League football from the very beginning. Others take longer to find their feet at the top level – and some, of course, never do.

Every player takes his own path to the top. But Marcus Boyall’s story is one of the most peculiar and perplexing in Collingwood’s history. He struggled to get a game for the best part of four seasons, during which time he often looked nothing like a VFL footballer. Suddenly, in just over half a season, he became one of the best centre half-backs in the game and seemed headed for greatness. Then, just as quickly, he fled to Adelaide in controversial circumstances, outraging Magpie officials and sparking a prolonged clearance war.

None of this had seemed likely when Marcus Boyall first appeared at Victoria Park in 1935. He was one of the production line of recruits from Collingwood Tech and starred at both footy and cricket. He was tall and lanky – around 6’2″ in the old scale – and soon found himself a spot with the Magpie seconds after leaving school.

His early performances were enough to get him a senior game late in 1935, but not enough to keep that spot. He didn’t do a lot better in 1936 either: he won the Gardiner Medal for the VFL’s reserves best and fairest, but managed only three games at senior level. He was horribly inconsistent, and when at senior level he was all arms and legs and usually looked way out of his depth. Many Magpie fans already had him marked down as a ‘dud’.

Nevertheless both kid and club persevered, and he strung together 13 games in the back half of 1937. But it looked to be the same old story when he was dropped just four games into the 1938 season. His career was at the crossroads.

And then it happened: a transformation so great that even his most ardent fans were left shaking their heads. This ungainly, ugly duckling of a footballer matured almost overnight into one of the best defenders in the competition. He played so well after being recalled to the team in Round 7 that he finished third in the Brownlow Medal, took home the Austral Trophy for most consistent Collingwood player and tied with Footscray’s Norman Ware for the Argus Cup as best player of the season.

One newspaper report said Boyall “had no equal” at centre half-back that season. Another said he had “unnatural judgement in the air and irresistible, forceful dashes on the ground”. “He promises to develop into the finest centre half-back the League has produced,” the report said. Former Richmond champion Vic Thorp wrote that Boyall had height, weight and pace. “He might be a champion of champions in his position before his career closes,” Thorp speculated.

His safe marking, excellent judgement and fearless runs through packs that year stamped him as a defender of rare quality. He was a wonderful mark, possessing a good leap and a sure grip, and his wiry frame was stronger than it looked. He was also renowned for his ability in the wet, for he marked the greasy ball with great certainty. His kicking style was variously described as “queer” and “awkward” but was usually effective, his kicks covering long distances. For a big man he was unusually agile, and he was regularly praised for his “clearing runs” and “dashing ground play”.

He capped off his breakthrough season with a stellar display against Footscray in the first semi-final, prompting one newspaper critic to compare him to South Melbourne’s legendary Laurie Nash and proclaiming him to be “a champion of the game”. All this and he’d only just turned 21.

Remarkably, that was where Marcus Boyall’s VFL career virtually ended. He disappeared after the 1938 season, leaving both the club and his job without notice. He reappeared weeks later in South Australia, having started a job as assistant curator at the Glenelg ground (working under Test cricketer Mervyn Waite) and claiming he would be playing football with Glenelg in the SANFL.

The Pies were incensed at Boyall’s actions and refused his clearance. What really irked the club was the feeling that it was only just beginning to get a return on the investment it had made. “We carried him for three and a half seasons, and we have really had just half a season of first-class play from him,” said secretary Frank Wraith. “He must wake up. He owes a duty to the Colllngwood members and the football public here.”

The club stayed angry, and despite repeated entreaties from Boyall, Glenelg and the Adelaide media, held firm and forced him to stand out of football for the entire 1939 season.

Boyall’s family later claimed Collingwood hadn’t fulfilled employment promises made to him, claims which the club strongly denied. And the Pies, in return, felt they had been blindsided. The whole issue became incredibly messy. Boyall several times looked likely to reappear with the Magpies but he always ended up back at Glenelg. After a year Collingwood felt he had suffered enough and granted his clearance – and promptly had their opinions of his talent confirmed when he won the Magarey Medal in just his second year. No wonder they had fought so hard to keep him in the first place.

Boyall was a stubborn man whose mind was next to impossible to change once it had been made up. That and his immense pride would have made it very difficult for him to return once he had said he was going to Glenelg (although he did try prior to the 1941 season, writing a letter saying he wanted to come back but then changing his mind). Nevertheless he loved Collingwood and retained this passion throughout the rest of his life, later spending a lot of time at the club and raising a family of fanatical Magpie supporters. Later in life he regretted the move, and the ill feeling it had caused.

Boyall played a few isolated games with Collingwood in 1942 and again in 1944 and ’45 while on service with the navy, but his heart was not really in it. He sought a clearance to the VFA in 1945, saying that he needed extra money to care for his sick mother. When that, too, was refused Boyall crossed to Camberwell without a clearance, and finished his playing career at Glenelg a couple of years later.

The great tragedy of Marcus Boyall’s eccentric career is that no one ever really got to see the best of him for any length of time. There was one magic season with Glenelg, and two thirds of a year at a similar level with Collingwood in 1938. The combination of his own career decisions and the intervention of the Second World War robbed the Magpies of a player who could have been one of the best key defenders of all time.