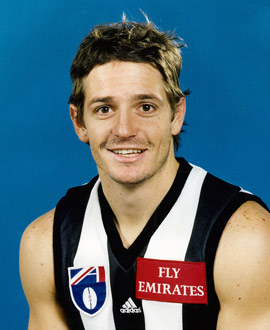 From East Ballarat via the North Ballarat Under-18s, Orchard played only six games in each of his first two seasons with the Magpies.

Just as he looked to be on the verge of pinning down a regular senior spot he and Ben Wilson were traded to Sydney for Anthony Rocca.

Sydney elevated him to a position of responsibility in the midfield brigade and he played 20 games with the Swans in 1997.

The next year saw him come 10th in the Swans’ best and fairest, and his speed and resilience equipped him for tagging or attacking roles.

He returned to Victoria Park at his own request and overcame pre-season Achilles problems to have a serviceable year in 1999 playing mainly in the centre square.

Despite playing 18 games in 2000 he was surprisingly cut from the Magpies’ list.