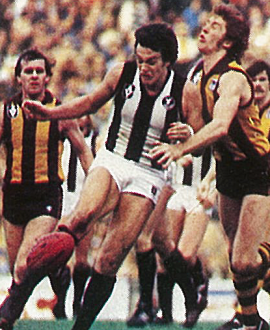 THERE are few more powerful names at Collingwood than Weideman.

So when you are the son of a man who was not only a dual premiership player but also an inspirational captain and one of the game’s leading enforcers, it was no surprise there was going to be pressure associated.

That was Mark Weideman’s football lot, one about which he never complained. It just went with the surname.

He handled the pressure and expectation he carried with him since he was a kid with exceptional talent. But in the end the issues with his body were things he couldn’t beat, and it reduced his time and effectiveness at Collingwood.

The son of club great Murray Weideman, Mark would end up playing only 28 games for the Magpies, including 20 in his debut season of 1981. The powerfully-built forward was hampered across his next three seasons in black and white by a series of knee and thigh injuries which sadly dulled his pace – never his strongest suit – costing him the chance of playing more regular VFL football.

Mark had been only 14 when his father returned to Collingwood from Adelaide to Melbourne to coach the Magpies for the 1975 season.

Already big for his size, and showing outstanding natural ability and strength as a key forward, he was signed up at that early stage to the Magpies. By the late 1970s he was regarded as one of the best 16-year-olds in Australia and his footy future seemed assured.

He could play centre half-forward, like his father, as well as centre half-back, and was even capable of pushing through the midfield on occasions in his early years. Strong beyond his years he could take big pack marks and roost the ball a mile.

Such was his prominence during one of the underage carnival games that when a kid from Western Australia turned in a good game on him, he received a call-up from Richmond soon afterwards. The kid’s name was Brian Taylor.

It wasn’t long before he made the leap to senior footy, debuting with West Adelaide in the SANFL at 16 years and 106 days in 1978. He went on to play more than 40 games with West Adelaide before crossing to Collingwood for the 1981 season.

After some impressive performances in the reserves, Weideman was selected for his debut game in Round 5, 1981, after a spate of injuries hit the Magpies. He ran out wearing the No.31 guernsey and, while he only had seven disposals,  managed two goals in Collingwood’s 63-point win over the Demons.

It was the start of 20 consecutive games for the 19-year-old, a fine achievement in a team that was on its way to a Grand Final.

Playing sometimes at centre half-forward, sometimes in the forward pocket, and occasionally as a back-up ruckman, Weideman showed good potential. He wasn’t quick, but could take a nice mark, and was a good finisher with the ball in his hands. He kicked at least one goal in his first five games and managed 23 majors for his debut season.

He kept his spot in the team for the first week of finals but was then dropped. When Peter Moore tore his hammy against Fitzroy, however, he returned for the preliminary final against Geelong, playing forward as Stuart Atkin took over Moore’s ruck role. Weideman had 10 disposals and had 10 hit outs, but always knew he was likely to make way if Moore returned.

Still, it had been an encouraging first season. But he played only two games in 1982, as torn shoulder ligaments brought him an extended stint on the sidelines. Then a series of debilitating knee and leg injuries began to dog Weideman and stop him from getting any chance of game continuity.

He started the 1983 season in strong form, kicking five goals – from six kicks – in the Round 1 game against Melbourne. He played the first three games of the season, but injuries and inconsistent form made opportunities hard to come by. He was back for two games late in the season, and then could muster only one more match in the 1984 season.

Having debuted in black and white as a 19-year-old, he was gone from Victoria Park before his 23rd birthday, losing the battle with his body. He tried out at Fitzroy, but didn’t manage a senior game. He crossed to Coburg in the VFA, where he became a star. His knee would still ‘blow up’ after matches, but he won a best-and-fairest with Coburg in 1987, was a member of the club’s back-to-back premiership sides in 1988-89, and was selected on the bench in Coburg’s team of the century.

Mark’s son, Sam was drafted by Melbourne as pick nine in the 2015 national draft. A key forward, like his dad and his grandfather, he looks to have a bright future in the game.