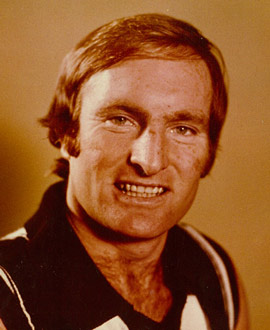 When Wayne Richardson came to Collingwood in 1966, the Magpies soon discovered that they had found themselves a bona fide champion. What they didn’t yet know was that there was still to be a bonus to the deal just around the corner – his younger brother Max.

Max started with South Fremantle (the club where his father Arnold had played 80-odd games in the late 1930s) in 1967, just as Wayne was embarking on his second season at Victoria Park. As soon as Pies officials got wind of Max’s emergence, they were onto him. They approached him in ’67 and brought him over for a practice game in ’68, though he had to return home to finish the final year of his trades course as a fitter and machinist.

But as soon as his studies were out of the way, Max wasted no time joining his brother at Victoria Park in 1969. He missed the first few games while serving out his qualifying period, then marched straight into the senior side (having first been selected in the reserves and called in as a last-minute replacement) for the round five clash with St Kilda. This was the first time he and Wayne had played in the same team together — in fact Max had not even seenWayne in action until he played against him in his first Collingwood intra-club practice match!

Most of Max’s early football was played on a half-back flank, where he was more easily able to pick up the tempo of Victorian football. He adjusted quickly, rarely missing a game over the next 10 years as he alternated between half-back, ruck-roving and eventually the centre. For a while in the early seventies there were even plans to turn him into a full-back — something which seemed to be asking a lot of a player who stood only 182cm (5ft 11.5in). In the end that did not eventuate, but Collingwood selectors had learned early that this was a man for whom they could set huge tasks because, wherever he played, Max Richardson always gave 100%. His commitment, desire and courage were unquestionable.

The key to Richardson’s game was the quality of his disposal. It was something that had been instilled into both he and Wayne from an early age, and on which they had worked as youngsters. The benefits of that work showed when they arrived in the VFL. Like Wayne, Max was highly skilled on both sides of his body. He was not quick, so had to rely more on his reading of the game to get to the ball first. He also countered his lack of pace with strength and by doing the hard things such as tackling, harassing and diving into packs. His real strength was his consistency. He was neither flashy nor flamboyant, but he was doughty and resolute, highly skilled and a high possession-winner.

“He was tough, consistent, solid, reliable and highly-skilled,” said Barry Price. “He was one of the old school of footballers.” “The thing about Max was that he gave a good solid performance week-in, week-out,” said Phil Manassa. Ted Potter marvelled at his courage. “He would do things on a football field that I thought he was going to get killed doing,” Potter said.

When former teammates talked of Max Richardson, the recurring themes in their testimonials were of honesty, hard work and reliability. The players respected him for the way he put in, and for his no-frills approach to the game. This did not win him a lot of votes in either the Brownlow or the Copeland (though he once finished second in the latter), but it did win him respect.

That’s just one of the things that made his and Wayne’s dumping from the team in 1976 so hard to fathom. These were dark days at Victoria Park, that year’s team ultimately claiming the club’s first wooden spoon. After losing the first two games of 1976, Wayne and Max were dropped to the reserves for the first time in their careers. Wayne then lashed out in the media, and at a meeting on the Saturday morning was suspended for four weeks. Max was changed and ready to run out for the reserves against Hawthorn when he heard of Wayne’s fate, and decided not to play as a matter of principle. Max was given only a severe reprimand.

Less than a year later he was captain, leapfrogging over vice-captain Len Thompson to replace Des Tuddenham. In the process he and Wayne became the first of Collingwood’s many pairs of brothers to have both been appointed captain of the Club. In 1977 Max played in every game, won interstate selection for both Victoria and WA (a state-of-origin game), helped lead the team from last on the ladder to first, and was just 30 minutes away from being a Premiership captain at his first attempt.

So it was a surprise, to put it mildly, when he was stripped of the captaincy for the 1978 season. Max was shattered, and admitted so to the media. He refused the vice-captaincy, and instead played out the year in the unfamiliar No.12 guernsey.

He played every game that year despite the snub, but after yet another unsuccessful finals series was one of a number of senior players purged from Victoria Park. He spent the next three years at Fitzroy, two as a player and one as coach of the seconds, before finally retiring. Max followed the pattern set by so many other former players when he returned to Victoria Park in the mid-1980s to work as a coach of the development squad and as an under-19 selector.

In a club famed for the number of siblings that have pulled on the guernsey, the Richardsons stand among the very best. Max might have been the bonus offering, but history showed him very much to have been a prized asset on his own.