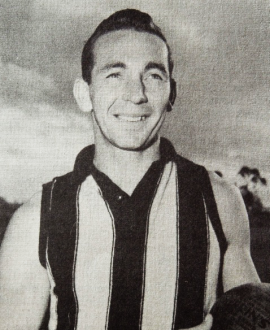 If there is one thing that anyone with even a passing interest in 1960s Collingwood footballers knows about Max Urquhart, it is that he was a wonderful wet weather player.

It’s there in many of the ‘pen pictures’ that appeared in newspapers and the Football Record at finals time each year. “If it rained every week he would never be out of the team,” was a typical offering from Kevin Hogan in The Sun in 1966.

The trouble is, Urquhart’s reputation in the wet did him just as much harm as good. For while it was due recognition for his great ball-handling skills and courage when the going got soggy, it also undersold his abilities in drier conditions. In the end, there’s still a suspicion that he was unfairly left out of some teams simply because it was dry. But as the Australian Football website has noted: “Urquhart’s hard running, straight at the ball style did not depend on any particular weather conditions for its effectiveness.”

Collingwood first became aware of young Max during 1959, when the great Harry Collier told the club about the consistently good performances of a 17-year-old playing in the Coreen League in southern NSW that he had read about in some local newspapers. Raised on a farm at Urana by his sports-loving parents, Max learned his football from his father, a former Wimmera League footballer, and by playing the game whenever possible with his brothers. He developed well and was selected to play with the Urana senior side at just 14 years of age.

Max made the long journey to Victoria Park for the 1960 pre-season, but returned home after just one practice match, having been tried at full-forward. The following season he joined Corowa in the Ovens and Murray League where, under former Magpie Frank Tuck, he was best and fairest in his first year.

By 1962 he was back at Victoria Park again – ready to give it another try. So keen were the Magpies to secure his services at this stage that they flew him to Melbourne to appear in a practice match. The newsletter that accompanied the first of those practice matches trumpeted his return: “He has now matured and has become one of the best players in his competition,” it said. “It will be of great interest to see how he performs today as we at Collingwood consider he could be the outstanding recruit of the season.”

He performed well in the first couple of games and then produced a “sparkling display” at centre half-forward in the last practice match. He looked a sure thing to be added to the list but again decided to head home for one more year, partly due to doubts about his ability to make it and partly because of how big it was to move from a small NSW country town to Melbourne.

He finally turned up at Victoria Park for good in 1963 – but even then it wasn’t straightforward. The Ovens & Murray League wouldn’t clear him until after he’d played for their League side in the country football championships (played on the Queen’s Birthday weekend). So he initially played on match permits, playing four games with the seniors before competing in the country championships, and becoming a fully fledged Magpie soon after his return.

He had an excellent start to football life, playing 13 games, kicking six goals and being one of the club’s best players in the night football series. But Max really arrived in the VFL in 1964. He played all 21 games, kicked seven goals and – remarkably – finished fourth in the Brownlow Medal (in what, it must be noted, was a particularly dry season). He came close to Victorian selection too, and was named in Footy Fan‘s Team of the Year. He even won a contest among Collingwood supporters to choose the club’s most popular player, for which he won a clothes dryer.

Max played mostly in the centre that year, giving the team exceptional drive out of the middle. He stood just under 6’ and was solidly built, so he was ideally built for a role in the hurly burly of midfield. He was, as one newspaper noted, “as game as they come” and never, ever, gave less than his best. He loved it when the going was tough and physical, and he could also take a mark.

“He is a strong, resourceful player able to handle key positions at centre or centre half-forward or work effectively on the flank,” wrote The Sun at the end of that year. “Good thinker on the field and there is purpose behind all his moves.” Footy Fan magazine agreed, paying particular tribute to his footy ‘smarts’: “His clever, creative play is often overlooked by the scribes and general public, but the umpires apparently can see these methodical passages of play, and he must rank as one of the best ‘thinkers’ amongst present day players.”

He played 39 games over the next three seasons, then broke his leg against Fitzroy early in 1968 and played only one senior game for the year. He moved to defence for his final season in 1969 and enjoyed an outstanding year, playing 18 games and winning praise as “a magnificent battler who simply wouldn’t know how to stop trying.” It was his best year since 1964.

In his penultimate game for the Pies, the second semi-final against Carlton, he took a spectacular tumbling mark over Alex Jesaulenko that achieved an unusual place in history when a photo of the grab, taken by The Herald‘s Bruce Howard, was named as one of the British Press Pictures of the Year!

Max moved to Tasmania after that and spent three years with Wynyard, also representing that State against WA in 1970 and at the 1972 national carnival. After that he returned to the country, via Melbourne, playing and coaching with Lavington (where he won both club and competition best-and-fairest awards) and finishing up with a final season at Walla Walla in 1978. He also served on the Tribunal for the Hume League for 31 years!

Collingwood waited a long time for Max Urquhart to make his way from country NSW to Victoria Park. Across 92 games over seven seasons he proved himself to be a reliable and whole-hearted trier who gave everything for his team. He was definitely worth the wait. 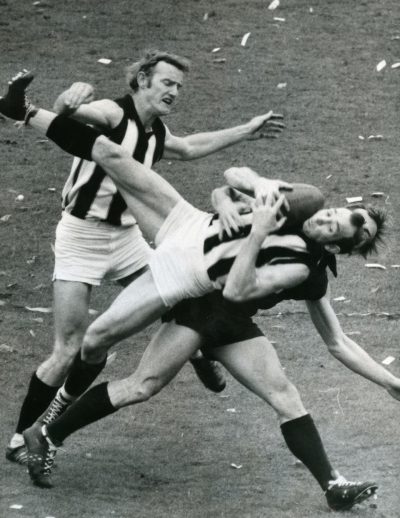