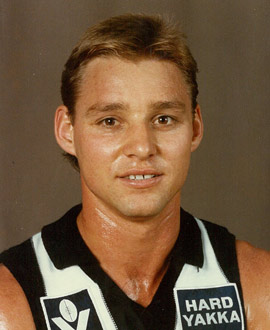 The blond-haired Richardson was enormously popular with Magpie fans when he crossed to Victoria Park from Swan Districts.

The Magpies had pursued him for several years and he delayed his departure from WA after falling through a glass window and missing the WAFL finals series, as he felt he owed Swan Districts another year.

His freakish goalkicking soon endeared him to Magpie fans and he topped Collingwood’s goalkicking with 49 goals in 1983.

In 1986 he negotiated a new contract but two weeks later was told the club was in financial difficulties and all players would have to take a 20 per cent pay-cut. He felt the club had let him down and he was cleared to Essendon, without any great success.

In a side accustomed to kicking long towards its tall forwards he was often ignored as an option and his form suffered.

He moved to Brisbane in 1987 and gave the Bears many fine games as a ruck-rover, centreman or even in defence as a creative half-back, and he believed that three of his four seasons at Brisbane were his best in the VFL.