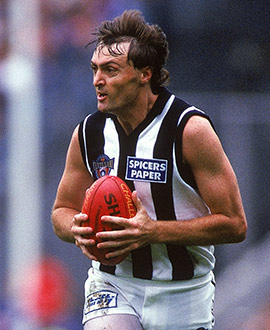 A prolific ball-winner whose talents were used across the centre and half-back lines, McGuane was genuinely a member of the top echelon of League players during his halcyon days of 1992-1994.

McGuane was a Collingwood barracker from his youngest days as a kid outside Ballarat. He was recruited from Sebastapol which was in St Kilda’s territory. Ironically the Saints, who were on the bottom of the ladder at the time, left him off the junior development list at 15 enabling Collingwood to snap him up.

His bouncing run was a familiar sight in Collingwood’s advance to the 1990 flag and an excellent season came after he had suffered a lapse in the early stages of his career.

In 1989, just his third season on the list, McGuane ran second to Peter Daicos in the Copeland Trophy, and he was one of the stars in the 1990 Grand Final when he constantly pumped Collingwood forward.

He injured a knee in 1991 and had a lacklustre season. After his friend Darren Millane died, McGuane took stock and approached Ray Giles, Millane’s trainer, to get him to a peak of fitness.

He came back with a magnificent 1992 season, winning All-Australian selection and the Collingwood best and fairest, an award he dedicated to his late friend.

He occasionally made headlines off the field, but was a generous individual and good judges like Leigh Matthews and David Parkin regarded him as having a superb football brain that was well suited to coaching.

In 1995, McGuane’s season was curtailed by a torn calf and twelve months later he came perilously close to death due to a bladder infection that resulted in a ruptured urethra. It originated after a kick in the groin in the ANZAC Day clash against Essendon.

He reluctantly left Collingwood after failing to come to terms to a two year contract, and said that he felt he needed a change of scenery as a spur. He admitted that he had trouble in the October to December period when the team’s campaign came to an end, and in five successive Octobers up to 1997 he underwent surgery.

He crossed to Carlton – of all clubs – in 1997 and had a rocky start, marked by a controversial dust-up with new teammate Matthew Hogg on the training track.

He admitted that he had been under the weather due to alcohol, but to his credit then did not have a drink till the following June.

Calf problems plagued him in his only year with the Blues, restricting him to just three senior games, and none against Collingwood.

He said he did not leave Victoria Park because of money but because he wanted a change, even though he had been offered a two year contract.

A four-time Victorian representative at state level, McGuane went on to work for Channel Seven and Radio Sports National as well as forging a successful coaching career in local football.