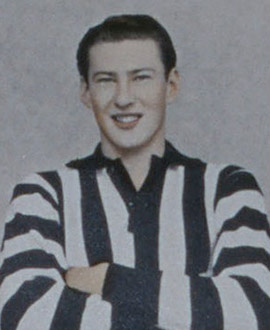 Over the years, Collingwood fans have been fortunate enough to be able to regularly thrill to the exploits of some of the game’s greatest high-flyers: from Dick Lee, Jack Regan and Ron Todd, through Billy Picken in the ’70s to Chris Tarrant and Jamie Elliott in the 2000s.

To that list should be added a 1950s aerialist whose spectacular leaps kept crowds excited and newspaper photographers supplied with a regular stream of great photos – Mick Twomey.

Most Magpie fans will instantly recognise the Twomey surname as Collingwood royalty, but Mick was distinctly different from brothers Bill and Pat and father Bill Snr. He was taller and tended to play in the ruck or key positions, rather than the midfield roles most commonly occupied by other family members. He was also a right-foot kick.

But ask anyone who saw him play to pick the defining characteristic of his football career and it will almost certainly be his aerial ability. He could soar with the very best, regularly reaching heights that few others could match. He had ‘soft’ hands, too, meaning that he almost always landed with ball in hand.

But Mick was primarily a follower who spent time resting either back or forward, which meant he could also put his prodigious leap to good use while in the ruck. And that’s exactly what he did from his first moments in a Collingwood jumper.

He had first appeared at Victoria Park in 1949, where he managed 11 games with the seconds. He had been a late bloomer as a footballer, being initially indifferent to the game and barely having kicked a footy until age 13. Then he was chosen in his school team for no other reason than his famous family name, and found himself enjoying the game. Within a few years he’d won Heidelberg YCW under-19s best and fairest as a 16-year-old, and that was enough to pique Collingwood’s interest.

But his early stint in the seconds won him few rave reviews. He was very lightly built, and was being bullied out of contests. His famous father was coaching in Ballarat at the time, so Mick headed up the Western Highway to play under him for the 1950 season. He played well, filled out his frame substantially, and returned to Melbourne in 1951 a fitter, stronger and more confident player.

He returned to Victoria Park for the 1951 practice matches – and began turning heads almost immediately with a string of brilliant, eye-catching performances. “Collingwood have another Phonse Kyne in young Mick Twomey,” enthused the Sporting Globe, “and when he learns some of Kyne’s artful tricks he may be even better. Twomey gave a great display of ruck play on Saturday. He took some glorious fingertip marks, and his hitting out to the rovers was equal to any of the good ruckmen playing today.”

Both the Globe and the Age predicted he would ‘walk’ into the Magpie team for the opening game – and they were right. He debuted against North Melbourne, and added to the growing buzz by kicking two goals, prompting the Age to suggest he could prove to be the most valuable of the Twomey brothers.

Mick was no ‘March champion’, and he held his good form through most of his first season, finishing with 14 goals from his 17 games and a second-place finish behind Bob Rose in an unusual best player trophy that used a handicap system to give younger players a better chance. His kicking left much to be desired but he was a revelation on the ball, using his great leap and excellent palming skills to provide his rovers with good first-use opportunities, but also covering the ground so quickly with his long-striding gait that he was easily the fastest follower in the VFL.

That combination of speed, aerial skills and athleticism prompted plenty of excitement. After being named as the club’s second best player in the finals in 1952 (a feat he would repeat the following year), Hec de Lacy in the Sporting Globe wrote that Mick could develop into the game’s most spectacular big man. ‘There are mighty few League ruckmen who can outleap this fellow,” de Lacy wrote. “And there are none with greater pace.”

Somehow, though, Mick Twomey never quite became the sensation that those early reviews had predicted. He enjoyed a fine career, to be sure, playing in two Premierships, more than 150 games and finishing third in the 1956 Copeland Trophy. And there were glimpses of his brilliant best, such as in the 1953 second semi-final when he produced a display of high marking that was “as good as has ever been seen on the MCG”, according to the Sun newspaper. But he never quite dominated the way many thought he might. Partly this could be put down to a succession of injuries encountered along the way – some minor, others more serious, especially post-1958 as his career spluttered to its eventual halt in 1961. But there were also question marks over his dedication to the game. He had a relaxed approach to life, and some say this may have been reflected in his approach to footy.

His brother Bill, in an interview in 1991, still felt that Mick was underrated. “He was a beautiful mark and a great ruckman for his size,” he said. “He was also a great clubman and team player. He really made a lot of footballers through his team play and unselfish play, either in the ruck or around the ground. He was very nearly one of the best players in the game.”

Mick’s time at Collingwood also produced one important piece of history. Older brother Pat had first played at Collingwood in 1947 as a centreman/flanker, but left after the 1949 season to play with Warragul. But Mick’s success in 1951 helped to lure Pat back. With Bill Jnr long since having established himself as a star after his debut in 1945, the three brothers managed to fulfil a dream in round five of the 1952 season when they took the field together against Carlton. The next year they became the first trio of brothers to play in a Premiership together. That day against Carlton was also memorable because Mick marked the occasion by taking yet another ‘speccie’ that brought the crowd to its feet. It was a classic Mick Twomey signature moment – and the perfect way to cap off an historic day for a family that has given Collingwood so much.