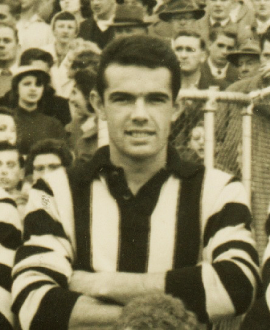 Collingwood certainly made the most out of its trip to Tasmania to play a game against a combined Northern Tasmanian Football Association side at the end of the 1956 season.

For a start they took along a 17-year-old schoolboy called Brian Beers for a trial, and he would become a Collingwood Premiership player just two years later. But selectors also liked what they saw that day of a tough, strong centre half-back for the Tasmanian side – and he, too, would go on to be a part of that fabled 1958 Premiership side.

Mike Delanty was at that stage a star centre half-back for the City club in Launceston. He had broken through as a 16-year-old in 1953, and had been a part of that club’s 1954 flag-winning team. He initially played as a rangy left-footer off half-back, occasionally spending time in the ruck. But by 1956 he had filled out and turned into a strong, tough key defender.

He was also fearless. In that game against Collingwood at the end of 1956 he took on Murray Weideman at his own game – matching him physically while still taking marks and going hard at the contest. “He gave Weed a bit of a touch-up that day,” recalled one teammate years later.

That was good enough for the Magpies. But a Melbourne recruiter was also watching that day: the Demons had their own exhibition match coming up the following week, and they invited Delanty to play half a game with them. He did so, and the Magpies knew they had a rival.

When Mike came to Melbourne soon afterwards to watch the Olympics, Collingwood pounced. And by the summer of 1957 he was training at Victoria Park and making a name for himself. “Mike Delanty … has impressed all at practice,” said the club’s practice match newsletter. “Only 20 years of age, 6ft 1in and 13.0, he is ideally built for League football and could develop into a very handy player.”

Delanty took a little time to adjust, but improved as the practice matches went on. After just two games in the reserves, he was chosen to make his senior debut against Geelong in Round 3, named on the bench. The following week he got his first start, playing in a back pocket and taking turns in the ruck.

There is little doubt that Delanty’s best role was at centre half-back. But Collingwood had an established half-back line of Lucas, Kingston and Tuck, and Mike initially found that hard to break into. So the club tried him as a ruck-rover, and even on the wing, where his speed (he’d done some foot-running in Tasmania) was a great asset. But it was only when he was able to return to the key defensive post that he really began to shine.

In that role he was tough, strong in the air and fast across the ground. He also loved the long left-foot kick out of defence – nothing too sophisticated, but effective in clearing his lines. His approach to footy was uncompromising and almost scary. “He could be wild at times,” said one former teammate. “He was great to have on your own team, and he would go in very, very hard. A few blokes on the other teams were a bit careful around him. When he got his dander up anything was possible, anything could happen.”

Not surprisingly, his first season ended prematurely because of suspension (and not just with any ‘victim’ either, but South’s infamous hard man Ken Boyd, underlining Delanty’s complete lack of fear of any opponent). But he’d become a regular otherwise, and that continued into 1958: indeed, in those first two seasons, the only games he missed were via two separate suspensions.

Like so many hard-at-it players, Delanty loved the big games. He played on the wing in the 1958 second semi but Phonse Kyne moved him to centre half-back for the preliminary final, where he blanketed North’s dangerous Albert Mantello. He kept his place there for the Grand Final and was one of the stars that day. Two years later he was outstanding in the 1960 finals series. Thereafter he continued to play a variety of roles, still mostly off half-back (whether flank or CHB), but also with some forays forward and onto the ball. He also reined in some of his more excessive physical impulses, as The Sun noted in 1960: “He is a better player since he realised that going in hard for the ball helps his team more than trying to flatten every opponent in reach.”

In 1961 he was joined at Victoria Park by his brother Bob, who played just the one season. Mike continued to be a highly consistent performer, but after missing only six games in five years (outside of suspensions), he struggled in 1962 after injuring his neck in a training accident, and then found himself named as captain of the reserves. That’s never a good sign, and when Mike found himself on the outer with Phonse Kyne when he turned up for the 1963 pre-season, he took the hint and moved to North Melbourne.

He managed a further four seasons, and 54 games, at North, and was a part of their 1965 Night Premiership side. He then spent three years as captain-coach of Camberwell and a further three with Heidelberg. Later in life he settled at Blairgowrie, on the Mornington Peninsula, where he jokingly anointed himself the ‘Mayor of Blairgowrie’, such was his involvement in local activities. He was also inducted to the Tasmanian Football Hall of Fame, as well as its Collingwood equivalent as part of the 1958 Premiership team

That Premiership represented Mike Delanty’s greatest moment in football – holding down a key defensive post in one of the greatest finals upsets of all time. But there were many other magical moments too, in what ended up being a wonderful career.