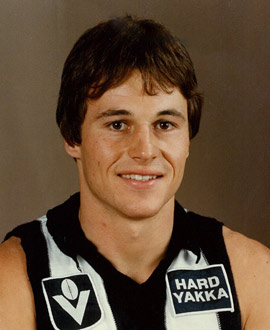 Recruited from Watsonia in Collingwood’s northern suburb heartland, Collingwood invited Browne to train at Victoria Park during the pre-season of 1981.

A Collingwood supporter in his youth, Browne was one of 150 local players invited to training, who each had to fight for a spot on the list.

Two of his brothers played in the under 19s and reserves, one of whom, Jeff, went on to run Channel Nine.

Browne played a total of 47 games for Collingwood, including 19 in 1984, when he won 21 disposals in the disastrous Preliminary Final loss to Essendon.

After a quieter season in 1985, he moved to Fitzroy.

“I played half a dozen games there but really struggled with the demands of VFL football, as it was back then, and was tearing my hamstrings…I lost my pace and I was pretty much gone by end of ‘86.

“There were massive differences in terms of the facilities at Fitzroy but I really enjoyed being with blokes like Gary Pert, Richard Osborne, John Blakey and all of those really good types of players and great blokes as well.”

Browne later became President of Collingwood’s Past Players Association and his son, Alex, won a spot on Essendon’s list.