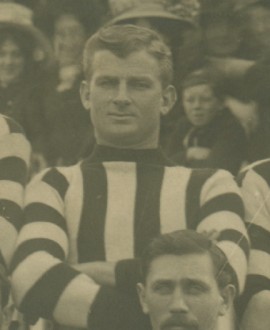 Ned Harper was 26 and already a seasoned bush footballer when he played his solitary game for Collingwood.

It had been something he had long wanted to do – to play a game of VFL football – and even though there were times when probably didn’t think he would make it, it finally happened in Round 7, 1910.

Circumstance helped him out. Leading into the game, the Argus had declared “Collingwood is the hospital team” given the spate of injuries that had stretched the club’s playing resources in a season in which it was pushing for the flag.

Harper had come down to join the club early in the pre-season from Yarrawonga, where he had captained the team at stages, and already shown a capacity to make his mark in any contest.

In May, the same newspaper said: “Two country players are training at Collingwood – Harper, who comes with the reputation of being the best all-round man in the Yarrawonga district, and Scott, a big follower from Swan Hill. The two men are not yet ready for the team, but will come in later on.”

Scott never did; and Harper would eventually win his chance after missing out early on selection and then heading off to play for Port Melbourne in the VFA for a period of time.

In May, 1910, he was training with Port Melbourne, with the local paper predicting: “Harper, who made his first appearance in the club’s colours, has the makings of a good footballer. He is very cool and his handball most effective.”

But much to their chagrin, when the Magpies were desperately looking for top-up players midway through the season, Harper was happy to come down to Victoria Park training yet again – this time with the greater chance of playing.

Port Melbourne was not happy, with the local paper reporting: “Harper, who gave promise of being a useful follower, deserted the club and threw in his lot with Collingwood.”

In the lead-up to the Round 7 game against Richmond at Punt Rd, with the Argus saying: “Harper trained with Collingwood … (and) was itching for a game – he may be in the Magpies’ nest any day now.”

Harper injured his leg either in the game, which Collingwood won by eight points, or at training the week after and never got the chance to play another VFL game.

But he did wear the black and white again, when the Magpies had a late-season tour of the western districts of Victoria. He donned the colours for a match against Colac, being named in the forward pocket alongside Dick Lee.

Little is known of Harper after that match, but he emerged at West Maitland, in New South Wales, in February 1916 to enlist as part of the 3rd Reinforcements of the 1st Pioneers. He was 32 years and three months old.

A single man, and working as a labourer, he gave his next of kin as a friend, Henry Kilbride, from the Cosmopolitan Hotel, Scone.

He served on the Western Front, where he was wounded on July 1916, with a gunshot wound to the thigh. In the final year of the war, he was in trouble with the army after being caught absent with leave.