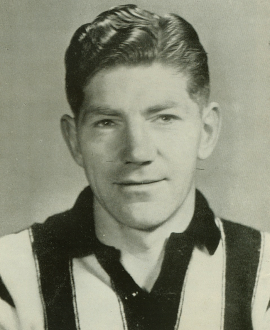 It seems hard to believe of a player who ended up captaining Collingwood, winning the Copeland and twice placing in the Brownlow Medal, but Neil Mann never really thought he would make it as a League footballer.

He was born at Diamond Creek – what Collingwood fans like to think of as ‘Coventry Country’ – the youngest of nine children. His family later moved and he ended up at Collingwood Technical School, where he wasn’t even good enough to make the school team. After he left school he didn’t even play footy for a while. He loved the game – he used to hang a rolled-up paper on the clothes line to practice his high marking – and was a rabid Pies supporter, but simply didn’t think he was good enough to justify playing.

Eventually one of his workmates convinced Mann to join him for a run with St Kilda thirds. He surprised himself by doing well, and immediately decided that if he was going to have a crack at VFL football, it might as well be with the team he loved (the thirds weren’t affiliated with VFL clubs in those days so the Saints had no claim over him). His next-door neighbour, a timekeeper with Collingwood seconds, helped with an introduction, and Mann’s impressive training showings at Victoria Park saw him given a chance with the reserves.

He struggled to adjust and battled repeated injuries in his first two years but eventually made his debut in the opening round of 1945, along with a handful of others who would go on to be big names, including Bill Twomey Jnr and Len Fitzgerald. He was mostly a forward in those days, and didn’t really make his mark until the end of his second season when, after starting the 1946 preliminary final on the bench, he came on at half-time and kicked five goals in the second half.

That was the turning point in Mann’s career. In 1947 he bagged 48 goals from full-forward to win the club’s goalkicking award, and Magpie fans thought they had found a useful key forward. Instead, the selectors surprised everyone the next year by swinging him to centre half-back – and what a move that proved to be. He settled into that role perfectly, finishing runner-up in the Copeland Trophy to Phonse Kyne and also being named in theSporting Globe’s Team of the Year.

The secret to his success lay in his hands. They were huge, and his capacity to hold 24 eggs in ONE hand (once photographed by a newspaper photographer) became legendary. He had a handspan of about 28cm, which made him a dangerous opponent in marking contests even if he had only used one hand. When he used both, he was nearly unbeatable. With his height (188cm) and weight (around 82.5kg) he was one of the strongest and most consistent marks League football has seen.

Bob Rose once described Mann as “the safest mark you would ever see”. Thorold Merrett, too, marvelled at his marking power. “Every ball he went for, he marked,” Merrett said. “Often there would be two or three blokes trying to belt the ball away from him, but it just wouldn’t budge — his hands almost covered the ball.”

If Mann’s hands were his greatest asset then his legs were his greatest liability. For a start they did not always produce kicking of the same quality as his marking. More seriously, his legs also gave him injury problems almost from the time he first pulled on a pair of football boots. He seriously damaged his right knee four times and his left knee three, and suffered recurring thigh trouble throughout much of his career after an accidental but severe kick ruptured his thigh muscle. For a while he even played with the thigh injury protected by two strips from an old aluminium billycan sewn inside an elastic bandage — a protective device which would “clang” every time an opponent hit it!

Considering his leg problems it is remarkable that Mann even survived as a footballer, let alone flourished to the extent he did. That he did so owes much to his marking, judgement and coolness under pressure, which allowed him to counter his lack of pace and mobility. But he also had a heart that at times seemed even bigger than his hands. He needed it, too; not just to cope with his injuries (he played a magnificent game against Melbourne in 1946 after badly gashing his foot with an axe while chopping wood on the morning of the game) but also to carry the Collingwood big man division — at times almost single-handedly.

The shift into the ruck happened by accident, not design. After his breakthrough season at centre half-back in 1948, Mann settled into League football and delivered a string of consistently outstanding performances.

But in 1951, Collingwood’s dearth of big men, exacerbated by the recent retirements of Gordon Hocking and Phonse Kyne, forced selectors to throw Mann into the ruck. It was here that his big heart really came to the fore. Time and again he would carry the rucks almost on his own, running himself into the ground in pursuit of a Magpie victory. He continued to be a danger when resting in either defence or attack, and developed something of a knack for kicking some crucial goals late in the game.

His heroics were never more needed — nor more in evidence — than in 1953 and 1954. In the former year he was one of the keys to Collingwood’s Premiership, finishing second in the Copeland and gaining what he always regarded as one of his greatest honours — a £5 note from Albert Collier, given to him after the grand final for his efforts during the year.

In 1954 many of the club’s Premiership heroes were struck down by injury in what turned out to be a disastrous year. As his teammates fell around him, Manny just kept plugging along, carrying an increasingly heavy load with no complaint — and then winning the Copeland Trophy and finishing second in the Brownlow Medal count to Roy Wright of Richmond.

Mann’s contribution was not confined solely to the playing fields. He was one of Collingwood’s great clubmen, and one of those who made the training rooms or end-of-season trips come alive. He was a gentle man both on and off the field, with a warm smile, a ready laugh and a hearty handshake. At social occasions he was renowned for his baritone renditions of “Open Road”.

He also loved practical jokes. Once, on a train trip to Perth, he played a tape of “the world farting championships” over the train’s loud-speaker system. On another occasion he turned up to training at finals’ time with a thumb that looked red raw and bloodied, claiming he had hurt it at work. It turned out to be a fake thumb he had bought from a trick shop that afternoon!

Mann’s on-field heroics won him the admiration of his teammates, and his off-field antics their affection. So it was no surprise that they elected him captain when Lou Richards stepped down late in 1955. But he spent only one full season as captain before retiring at the end of 1956.

That retirement was merely the signal for the start of the second phase of Neil Mann’s Collingwood career. He immediately became coach of the reserves, a job he held from 1957 to 1971 and in which he gave great support firstly to Phonse Kyne and then to Bob Rose. He refused many offers from other League clubs, and his loyalty and patience were rewarded with a three-year stint as senior coach — from 1972- 74. After a two-year break, he returned as a committeeman and served until 1982. He was inducted into the Collingwood Hall of Fame in 2004.

Few men can lay claim to such a long and distinguished record of loyal service as Neil Mann. He was one of the most courageous and talented big men of his day, one of the best team players in the VFL, one of Collingwood’s truly great clubmen and one of its most popular personalities.

Not bad for a bloke who didn’t think he was good enough for League football.