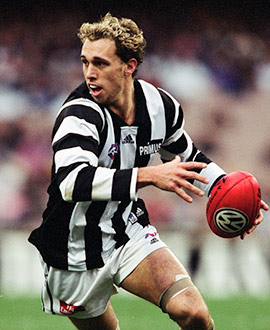 At times during the 2001 season, Davis bordered on the edge of stardom. Yet twelve months later, he quit the club for Sydney, leaving Collingwood’s half forward line much the poorer.

His best was scintillating, and his right boot hit the Sherrin as sweetly as anyone in Australia. Though not a big man, Davis knew how to thump a football from long range and his class meant he was a constant danger around goal.

The son of former Magpie (and Blue, Roo and Swan) Craig Davis, Nick was one of the most sought after youngsters at the 1998 National Draft.

He grew up in Sydney, playing for the NSW/ACT under-18 team.

Davis and Brad Oborne (Rod’s son) were drafted to Collingwood under the father-son rule on the same day in late ’98, and he was rushed straight into the senior team at the start of the season, such was the club’s plight at the start of 1999.

Fortunately he was used to the tempo, having played a handful of reserves games in 1998.

He was one of six first-time Magpies in the opening round of 1999 and retained his place on the wing throughout the first half of the year, receiving a Rising Star nomination for his 18-disposal effort against Essendon on ANZAC Day.

The 19-year-old’s form tapered off as the year wore on and he could muster just two disposals in his last two games of the year.

He struggled early in 2000, but a heart-to-heart with his footballing father saw him begin to settle.

It all started to come together when he kicked four goals from 30 disposals to roll an orange-clad North Melbourne on the eve of its finals campaign at Docklands.

The blond-tipped Davis polled Brownlow votes in three games and again saved his best for the Kangaroos, polling four of his five votes against them and kicking a ball-bursting 60 metre torpedo goal in the final round of the season at Manuka Oval. He finished the year in sixth place on Copeland Trophy night.

Unfortunately, homesickness led to an indifferent start to 2002, and a slow start to the year put him firmly in the media spotlight.

Davis fought back with four goals from 17 disposals against the battling Saints in round six and his year gradually gathered traction, ending it with 31 goals despite talk of groin complaints.

He helped Collingwood lock in a top four berth when he put his team in front late in the day against St Kilda in round 21 and contributed in the finals wins over the two South Australian teams, kicking two goals in each match.

A quiet Grand Final day, in which he was the only Magpie not to lay a tackle, turned out to be his final appearance in a Black and White jumper.

Davis sought a trade to Sydney in October and was swapped for draft selection No.21 (Bo Nixon).

He started slowly with the Swans because of a groin complaint but had brilliant passages during the season, the highlight being his winning goal against Collingwood in round six.

Another injury-bedevilled season in 2004 restricted him to 12 games, but when he did play, he produced a couple of damaging games.

He famously kicked four last quarter goals including the match-winning goal in the dying seconds of a 2005 final against Geelong and was part of the Swans’ 2005 flag side, but in 2006 he lost form and fitness and when dropped was critical of the club, before regaining his place and returning to the team to be an effective player in the side that lost the Grand Final.

He played the opening game of 2008 but then was dropped to concentrate on his pressure and tackling skills, which was an indicator he was falling out of favour.

Davis’ career came to a close at season’s end, but he remained at the Swans for several years as a development coach and match day runner.