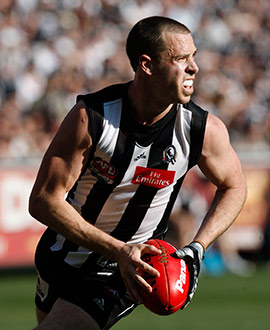 Ex-St Joseph’s and Geelong Under-18s player who joined the Magpies via North Ballarat.

Maxwell was overlooked in two national drafts and although he trained with Port Adelaide, Hawthorn and Geelong he was ignored. After three weeks training at Geelong he was told by Bomber Thompson that he would be discarded. The next day he was phoned by a Collingwood physio who did part time work with the Roosters and he enquired about a spell of osteitis pubis he was managing. Then Collingwood picked him up in the rookie draft.

He broke into the senior side midway through 2004 and immediately showed an energetic approach. He was used at both ends of the field, but looked more at home in defence in the closing weeks of the season. His breakthrough year was 2005 when he showed a down to earth approach to his defensive duties.

Early in 2006 he was usually assigned to much bigger forwards, but he played tall and handled them all. A mid-season injury cost him six weeks and he took a while to get back into form when he returned.

At first he was reluctant to accept the No.5 guernsey vacated by Nathan Buckley when Buckley offered it to him at the end of 2007, but expressed his respect for Buckley and said that he was under no illusions about being as good as the champion.

Late in 2008 he broke a bone in his wrist, but kept on playing and had one of his most important games for the club when he negated Adelaide’s Scott Thompson in a final. He was appointed captain for 2009 and won all-Australian selection that year.

In 2010 led the Magpies to a flag and showed himself to be a natural leader. He captained the losing Grand Final side a year later and continued as skipper into a fifth year in 2013.

Maxwell handed over the captaincy to Scott Pendlebury in 2014, and began the year in fine form, notching his 200th senior game against Sydney in round two. A nasty ankle injury against Essendon in round 17 forced his premature retirement, but his legacy as a champion of one of the club’s finest eras will live on forever.