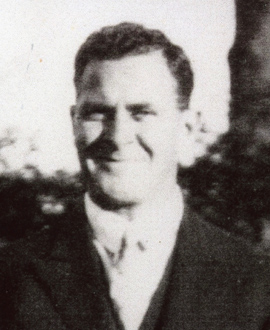 Noel McCamish’s nomadic background was on display for all to see when, in 1923, he applied for a permit to play with Collingwood.

The Pies were optimistic about his prospects, telling one reporter before the hearing that they expected him to turn into a “top-notcher”. When his time came to appear before the VFL’s Permit Committee, McCamish explained his footballing pathway as “born in Victoria, began to play the game in South Australia and developed as a player in Western Australia.”

And that sums up Noel McCamish’s slightly unusual journey to the top. Unfortunately his stay there was brief.

Noel’s father, Robert, was a merchant, which possibly explains why Noel moved around so frequently. Having been born at Carlton in 1900 (with the wonderful middle name of ‘Whitehouse’), by 1915 he was being educated and playing school footy in Adelaide. By 1921 he was playing with Perth in the WANFL, where he also made a name for himself as a wicketkeeper in grade cricket.

Even though Noel wasn’t a regular with Perth, Magpie officials were excited when he decided to sign with them upon returning to Melbourne in 1923 – especially after he kicked three goals in one of the early practice matches.

He made his senior debut in Round 3 against St Kilda, named in a forward pocket alongside Bob Makeham after Charlie Lee was injured. He kicked a point that day but otherwise had little influence as the Pies suffered a bad defeat.

McCamish was one of those who paid the price for the loss to the Saints, and he was dropped the next week. He played a few reserves games with the Districts team but made only one other senior appearance, in Round 13 against Geelong. He also accompanied the team on its trip to Tasmania in August of that year, playing in one of the two exhibition games and rating a mention for having played well in defence.

It’s hard to keep track of Noel in 1924. He didn’t play senior football with the Pies, but still needed a clearance from the club when he crossed to Hawthorn midway through 1925. He couldn’t crack it for a senior game there either, however, and ended up at Camberwell in 1926. He was seriously injured in a car accident during the summer of 1926-27 and retired from football (though he continued to play cricket) but changed his mind early in the season – only to be promptly rubbed out for seven matches after getting involved in a fight. He then seems to have moved into administration at both the cricket and football clubs (maybe it was in his blood, as his father was by this time Mayor of Camberwell).