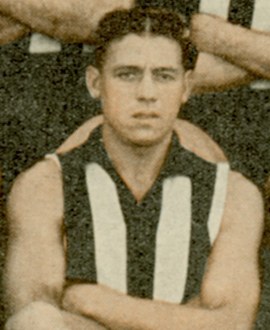 A utility player who is one of the few men to play with four clubs, after initially playing for Richmond seconds. He was killed in action as a commando in New Guinea in World War II.

The last Magpie to die at war was Norm Le Brun, who played 19 games for Collingwood in the latter years of the depression – 1933 and ’34.

For part of his short time at Victoria Park, he was a second rover to Harry Collier in a team coached by ‘Jock’ McHale.

He also had the distinction of being one of only 24 players to have represented four different VFL-AFL clubs.

Precious little has been known about Le Brun’s personal life, partly because he never married and never had children. So only a few snippets of his football life and the details of his life and death in the service of his country remain.

Each Anzac Day Le Brun is remembered as one of the game’s fallen soldiers. He was only 36 at the end – older than most of those who perished around him and yet still ridiculously young to die.

As a member of the elite 2/6th Australian Commando Squadron, Le Brun was shot by a sniper hidden among the base of a tree root in Aitape, near Lae, in New Guinea. It was November 15, 1944, the penultimate year of the war.

His fellow soldiers mourned him, as did the footballers who had played with him at the Magpies – and elsewhere.

For many years, it has also been assumed that Le Brun held another distinction.

The AFL had long believed that the well-liked, much-travelled Norm Le Brun was the first Aboriginal player to represent the Collingwood Football Club, placing him on a list of “known Indigenous players.”

But some recent genealogical research from Kate Wastie, the grand-daughter of Le Brun’s first cousin, has uncovered that the former Magpie rover had a very different heritage than assumed,

Wastie’s extensive research has revealed that Le Brun is almost certainly not indigenous, but from a mix of backgrounds, including from Cape Verde, an archipelago off the west coast of Africa; from Jamaica; from Scotland and from the Channel Isles, Jersey.

“I’m not sure where the story started that Norm was indigenous,” Kate Wastie said. “It could have been because of the colour of his skin, I don’t know.

“There would not have been too many migrants into Australia from countries outside of the UK and Europe in those days.

“I suspected for a while that Norm might have been indigenous until I started doing some research into the family.”

For many years all Kate Wastie knew of the late Norm Le Brun was of a photograph at her grandparents’ house.

“To me, he was just the man in the photo on the sideboard that had a poppy in the frame,” she said. “I used to say: ‘Who’s that?’ They used to call him ‘Normie’. Everything I have found out about him suggests he was a real character.”

Kate’s grandfather was born in the same year as Norman Stanley Le Brun, and the loss of his first cousin had been felt for many years after his death in 1944.

Both were connected to one of the pioneers of the Mornington Peninsula, their maternal grandfather, Antonio Albress, who was not born in Australian, but who was a native of the island of Boa Vista, the eastern-most island of Cape Verde – which is almost 500km from Africa.

Antonio had been born there in 1842 and migrated to Australia in around 1860.

“There was a story that had been handed down through the family that we had come from Portugal, which technically isn’t untrue,” Wastie said this week. “Cape Verde used to be a Portuguese colony.”

“It was all about the slave trade over there. Antonio decided to come to Australia in 1860. He had been involved in lime burning (in Cape Verde) and that was what probably took him to Rosebud and Rye area. He was one of the pioneers of the (Mornington) Peninsula.”

Antonio would marry Maria Bennett in 1878, an Australian-born woman whose family background was similarly very different for the times.

Maria’s father, Thomas Bennett, hailed from Jamaica, and her mother was Elizabeth McMurray, from Glasgow, Scotland.

One of Antonio and Maria’s children, Maria, who was born in Rye, would become Norm Le Brun’s mother.

Kate Wastie decided to check Norm’s paternal side, with the focus on his father, Frank Le Brun, who was born in Stawell.

“I’m not as familiar with the (Le Brun) side, but I looked it up because I wanted to see if Norm had had an Aboriginal background on that side,” Wastie said.

“I couldn’t find any evidence of an Indigenous background,” she said, pointing out that Norm Le Brun’s dark features more than likely came from the Cape Verde and Jamaican connections.

But, as we approach Anzac Day, it is important to remember that Le Brun made the ultimate sacrifice as the 10th – and last – Collingwood footballer to be killed as a result of war.

Collingwood lost eight players and past players during the First World War, with one of them, Alan Cordner (20 games, 1913-14), dying on the first day of the Gallipoli landings on April 25, 1915 – just three days after a young Norm Le Brun enjoyed his seventh birthday.

The Second World War saw Magpie players and past players enlist in even greater numbers as the theatres of war came closer to Australia’s doorstop.

Norm Oliver, who played 13 games with Collingwood from 1940-41, was killed when his Kittyhawk crashed near Madang in New Guinea on June 27, 1944.

And five months later, Le Brun also was killed in New Guinea, making him the last of the Magpies lost in war.

Le Brun, a 171cm, 72kg rover/forward, had made his VFL debut for South Melbourne in 1929, kicking two goals in his first game, but managing only three matches before heading to Sandhurst the following year, where he was the equal winner of the Bendigo Football League best and fairest award.

Such was his form that Le Brun won another VFL chance, and he played 23 games for Essendon in 1931-32.

History doesn’t recall how Le Brun came to Collingwood, though it is known that he was performing well in the seconds side under McHale’s much respected understudy Hugh Thomas before being selected for his first game in black and white. That came in the Round 3 game against South Melbourne in 1933.

Then 25, Le Brun played two games that season with limited impact, before being relegated to the seconds again.

But he began to make his biggest impact at Collingwood in the 1934 season. He became a more settled member of a side that had many club greats in it, including Syd and Gordon Coventry, Harry and Albert Collier, Jack Regan, Charlie Dibbs, Harold Rumney and Phonse Kyne.

Le Brun played 17 games and kicked 23 goals for the season. At one stage of the season, the Argus called him: “the most improved man in the side.”

On three occasions that season he kicked three goals in a game, including in a thrilling draw with Geelong, and his season tally was fourth at the club behind Gordon Coventry (105), Phonse Kyne (29) and Harry Collier (25).

The biggest headlines Le Brun was ever a part of came from a game that contained the “most disgraceful scene(s) in the history of the game.” In one of the most brutal Collingwood and Carlton contests, Syd Coventry suffered a serious head injury after being hit by Gordon Mackie, and Norm Le Brun copped some punishment from Harold Maskell after taking a mark.

Umpire Bob Scott claimed that Maskell had jabbed Le Brun “with closed fists on each of his ribs.” But in keeping with the code of not dobbing on an opponent, Le Brun denied that Maskell had deliberately punched him. He said: “We are all keen on the game, and all felt hot and bothered, but I only felt a hit on the shoulder. He was trying to knock the ball out of my hand.”

Le Brun’s last game for Collingwood came in the 1934 semi-final against South Melbourne. It was his only VFL final, but the Magpies lost.

Incredibly, Le Brun ended up at Carlton the following season, the side that had handed out such a physical battering a year earlier. But that wasn’t the end of his club swapping. He spent time at Coburg, South Warrnambool, and was even appointed coach of Ulverstone at one stage.

Le Brun remained playing well into his 30s. Not even the Second World War stopped him. A single man, he enlisted on February 26, 1942 – a week after the bombing of Darwin – but kept playing football in the services.

An Argus reporter gave a glimpse of how members of the forces in far northern Australia maintained their fitness in April 1943. He wrote: “In this part of the world, where climate varies only from wet to dry, all forms of sport flourish and die together.” The great Albert Collier and Norm Le Brun were among them.

Trooper Le Brun sailed from Townsville on the HMAS Katoomba to New Guinea.

According to a book, To The Green Field Beyond, by Shaun O’Leary, Le Brun was the first Australian soldier to die in what would become known as the Aitape-Wewak campaign – a campaign that was seen at the time as a “mopping up exercise” in purging the Japanese from New Guinea.

The book said: “On November 15 (1944) the squadron suffered the 6th Division’s first battle casualty in New Guinea … the going was heavy, the maps inadequate, and there was an absence of tracks, so the patrol was constantly bashing its way through. At 1pm it sighted four Japanese across the river and killed one of them. At 2.30pm it wounded another who succeeded in escaping. At 4pm a party of Japanese was seen near the native huts, all of them carrying carbines.”

“This force was engaged in a fire fight, which lasted three quarters of an hour, in the course of which Trooper N.S. Le Brun was killed by a rifleman concealed among the root of a large tree. The country was too steep and the jungle too thick for the patrol to bring Le Brun’s body back.”

He was buried a few hundred metres from where he fell. Later, his body was moved to Aitapi before he was eventually laid to rest in the Lae War Cemetery.

One of his close friends, Norm Odlum, was quoted in the book Fallen as saying: “Everyone had the greatest respect for him and although he was older than most of us, he mixed in well, and I never heard anyone say a word against him.”

In May 1945, six months after Le Brun’s death, an article in the Argus revealed how the Australians had re-named the area in which he had fallen after him. It said: “In the Aitape sector is the Le Brun feature, a steep hill on the Danmap River and known simply as Le Brun. It is named after the first Australian killed in the area, Norman Le Brun, trooper in a Calvary Commando squadron and a well-known Victorian footballer.”

That’s how Norm Le Brun should be remembered, not as a man who played for four VFL clubs, but as a brave Australian who did not let his country down.