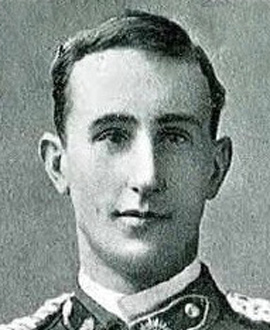 Orm Pleasents had a sense of timing.

Six days before the Armistice was signed, and five days before he turned 36, the one-game Collingwood footballer, bank accountant and veteran of two wars sensed his moment and took it.

It was November 5, 1918, and Captain Pleasents would produce an act of such courage and coolness under pressure that it would win him a Military Cross.

He would not receive the medal until after the war had ended, but the citation summed up the gallantry he displayed as the First World War ticked down to its final days and final hours.

It would read: “When the left flank of the brigade was forced back by hostile machine gun fire in strong posts to the jumping off line, he at once sent out patrols to locate the machine guns, and then went forward himself and, in spite of machine gun and shell fire, reconnoitred the whole position, marking down several machine guns, and reporting them to the artillery.

“The information was so accurate that the guns were quickly knocked out, thus allowing the infantry to advance later with very slight casualties. All through the operation he handled his squadron with great courage and ability, gaining valuable information, and helping the infantry in every possible way.”

Pleasents had a strong military pedigree. His father, William, was a Lieutenant-Colonel and long-serving militia man, who had briefly served on transport duty in 1915 – despite being over 60 – before being discharged the same year.

Orm had been born in Benalla, but spent most of his childhood in Euroa before joining the Australian forces for the Boer War, where the teenager acted as a bugler. On his return from South Africa, in 1900, the Euroa Advertiser welcomed him home: “Twelve months ago, he left Euroa with the first contingent a mere stripling. Last night a very different form appeared. Although just out of hospital, from an attack of tonsillitis … Ormond appeared ever so much broader and heavier, his frame rounded to manhood’s proportions.”

“He has been one of the few – the very few – to go through the South African campaign from start to finish. His face and figure betoken that he has had hard work and rough times.”

That was before his time with Collingwood. It wasn’t until 1907 that the 24-year-old would get the one chance to play in the black and white, representing the club in the Round 3 game, against South Melbourne at the Lake Oval. He had been recruited from Hawthorn in the Victorian Metropolitan Football League, but his sole performance ended sadly in bad defeat for Collingwood. He played in defence that day, and The Herald noted afterwards that, “as a lieutenant in the militia, he should be used to defending”. But his debut otherwise passed almost without notice, so we know little about his abilities as a footballer (indeed he achieved many more mentions for his time in pennant cricket while in Melbourne, where he became renowned as a batsman with a strong cut shot, brilliant fieldsman and handy google bowler). He was soon back playing footy with Hawthorn again.

Soon after that he shifted to Hamilton to work with the National Bank. He was chosen to captain Hamilton in 1909 but asked to be relieved of the responsibility midway through the season. In 1910 he moved to Warrnambool, and the local Hamilton paper noted: “During his stay in this town, Mr Pleasents has made himself popular in various directions. He takes an active part in cricket and football, being a fine exponent of each of those games. He is also a talented musician, in which capacity he has displayed a deep interest in the orchestral society, and as a general entertainer he is the life of a social gathering. His genial personality will be much missed.”

By 1914 he had been transferred again, this time to the Mildura branch. And it was from here he decided to enlist, signing up on December 14, 1914 with the second reinforcements of the 4th Light Horse regiment. He sailed from Australia on the Katuna on February 3, 1915 and would serve with great distinction in Egypt, Gallipoli and France, though he was badly gassed in 1917. The culmination of his war service came when he was awarded the Military Medal in November 1918.

But the war didn’t end for Captain Orm Pleasents when the Armistice was signed. For a time, he worked on transports, escorting alien prisoners back from Australia before his eventual discharge. He later moved to England, where he married in 1945, but sadly died the next year aged 63.