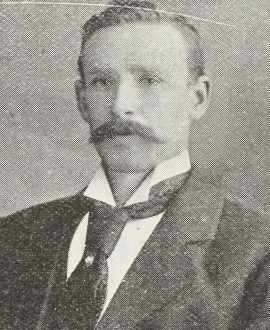 The Collingwood Juniors played an important role in the early days of the senior football club. It was our first ever feeder club (the term ‘Juniors’ only referring to the team’s status, not the age of its players), producing a number of players who would go on to captain the club and be stars of the game.

Peter Miller was not one of those big name stars. He managed only the one senior game for Collingwood. But he was a wonderful player for the Juniors side, spent time as captain and established a fine reputation as a sportsman and citizen. And his tragically early death while still in the middle of his playing career was mourned across the suburb.

Miller first made a name for himself with South Yarra across the 1893 and 1894 seasons, playing mainly as a key forward and regularly kicking goals. He appears to have transferred to Collingwood Juniors in 1895, and was named in some of the early senior squads (referred to as a ‘local junior’) without ever making it to the final side. His one shot at the big time came when he was named at centre half-forward in the seniors for the Round 3 game against St Kilda (although, in a slightly confusing twist, he was initially named in both the Juniors and seniors teams that weekend!). He managed to kick a behind during the game but otherwise had little impact and returned to the Juniors the next week. He was cleared back there permanently mid-season and returned to carving out a successful career for himself at that level.

Little is known of his playing abilities, although The Herald once described him as a “capital all-round player”. He tended to play mostly as a key forward or follower, and was handy around goals. In May of 1899 it was announced that he would be going to South Melbourne, but instead he seems to have spent most of the season with the Juniors, then tried out unsuccessfully at South before crossing briefly to West Melbourne late in the year, kicking two goals and being best on ground in his debut for them.

But he returned to Collingwood Juniors in 1900, and was captain both that year and the next. In 1900 he was joined by his brother Bert (Albert) and the two played some wonderful football together. At the end of June in 1901, The Herald wrote: “Captain Miller never played a better game in his life than [he did] against Northcote.” So good was that game that the same newspaper reported that Carlton were about to give him another chance at senior level the next week.

For reasons unknown, that never ended up happening. And remarkably, just five weeks later he was dead.

The Herald of August 9 recorded: “Peter Miller, late captain of the Collingwood Junior Football Club, died last night in the Melbourne Hospital after a short Illness. He was a very popular player, and was held in high esteem by his mates.”

Miller, a carpenter by trade who was living in Langridge Street and married with six young children, had contracted an apparently sudden bout of appendicitis that proved fatal. He was just 29. A combined social, concert and art fair was held at the Collingwood Town Hall to help raise funds for his widow and family. Other events were also scheduled, and the Collingwood Imperial Band played at Victoria Park at the following game to encourage fans to donate. The various death notices all proudly noted his role as captain of the Collingwood Juniors side. The VFL even contributed £5 to a benefit fund for Miller’s family, giving some indication of the respect in which he was held in the wider football community.

An unfortunate footnote came the following year, when a man appeared in court upon fraud summons, charged with having misappropriated funds from the sale of tickets to a benefit concert for Miller’s family.

But not even that disgraceful act could tarnish Peter Miller’s overall legacy. He might not have managed a lengthy senior career, but his work with the Juniors side was significant, and he departed with the high regard of everyone associated with both football clubs. That is no small mark to have left.