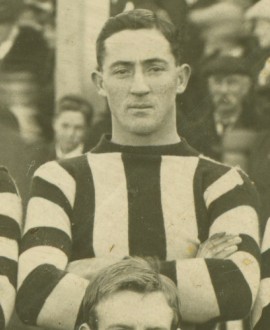 By now, the story of Paddy Rowan’s personal journey is so well known as to scarcely need repeating: the promising young country footballer who moves to Melbourne under as assumed name, takes up with Collingwood and forms an intensely close mateship with one of his Magpie teammates, ‘Doc’ Seddon. The two play footy together, cricket together and work together, and when Seddon introduces Paddy to a childhood friend, Louise Newby, he is instantly smitten. Doc is best man when Paddy and Louise marry, and soon after the two close friends head off to the First World War together. Paddy never makes it home, but when Doc does he fulfils a private pact the two made to help look after Louise, and the newly born son that Paddy never got to see. Over the years, support and friendship develop into something more, and Doc and Louise end up marrying, and have a further two children of their own.

It’s a remarkable story of love, loss and mateship in a time of war – made no less remarkable by the fact that it was turned into a book in 2011, Paul Daley’s ‘Collingwood, A Love Story’.

But the focus on that story has, over time, tended to obscure something important – just how good a footballer Paddy Rowan was in the first place.

Rowan – or Percy Rowe, to give him his real name – came to Collingwood from South Bendigo in 1911. Born near St Arnaud, he’d already made a name for himself as a country footballer of some repute in the strong Bendigo competition (which featured a number of other future Magpies). He was also a handy boxer, fighting under the name ‘Paddy Rowan’. When he moved to the city with the British Imperial Oil Company and decided to throw in his lot with Collingwood, he discovered he would not be able to do so as he’d already played with South Bendigo that year, which made him ineligible. So he decided to play under his ‘ring’ name to get around the rules.

Collingwood was almost instantly glad he did so, because he became an immediate fixture in the team. Rowan was a strongly built, no-nonsense type of footballer. A fine mark, long kick and energetic worker, he played mostly as a follower, but could also play in key positions back or forward. Because of his boxing prowess, much attention over the years has been devoted to the strength and robustness of his play. But he was actually a scrupulously fair footballer, and also much more talented than would be gleaned from those who focused only on his physical attributes.

The captain for most of his time at Victoria Park, and a fellow alumnus of the Bendigo competition, Dan Minogue, writing in the Sporting Globe years later, paid this tribute:

“Paddy Rowan was one of the outstanding players of his time. I feel sure that, had he been spared to return from the War, he would have gone down in football as one of the game’s greatest exponents. There was no phase of it in which he did not excel. A strong, virile follower he could, with equal effectiveness, play centre half-back or centre half-forward. Paddy possessed the determination and courage of two men.”

It wasn’t just his teammates singing his praises. “Rowan, of the Collingwood team, is one of those players who do not play to the gallery,” wrote the Football Record in 1913. “Yet he puts in such a power of telling work that leads to victory so often for the Magpies. He was splendidly dashing and unflinching.”

The Victorian selectors agreed, naming him in an interstate team in just his second season, and again in 1913. He was named Collingwood’s vice-captain in 1914-15, and received a special trophy as the club’s most popular player of the season in 1915.

Sadly, the Grand Final of that year would be the last Magpie supporters would ever see of Paddy Rowan. It had been a big few months in the 26-year-old’s life: he had enlisted in July, been married in September and played in a losing Grand Final the same month. He was already in army training camp by the time that game was played (reputedly after a Carlton-supporting commanding officer had ordered a 10-mile route march on the morning of the match) and sailed to the Front in December. Watching him play one of the games late that year, one observer remarked as Rowan burst through a pack of players: “I pity the Turks when men like our footballers get at them.”

Alongside Paddy for many of those events was his great friend ‘Doc’ Seddon. The two had become almost inseparable from the time they both arrived at Victoria Park in 1911. Doc was even in Paddy’s corner during a legendary boxing bout that Paddy fought against a Wimmera boxing champion in Egypt in his early days overseas. Paddy won on points after 20 rounds, despite being downed about a dozen times in the last seven rounds. He took the count to nine each time and staggered through – and won. Such was his courage, resilience and determination. Seddon and several other former teammates went in to see him afterwards but he was so beaten up he couldn’t recognise them at first.

Sadly, Doc wasn’t by Paddy’s side on the night of December 4, 1916 – not that there was anything he could have done anyway. Bugler Alf Cohen was in the trenches in France that night, and wrote to the Collingwood Football Club afterwards to tell what happened:

“I was with Pat and some more chaps in a bombing post in one of the hottest corners of the Somme firing line,” he wrote. “It rained shells and bullets here, and we had some miraculous escapes, but fortunately no one was seriously hit till about half an hour before we got relieved, when Pat got it.

“It was about 6pm on the evening of Monday Dec. 4. Pat was stooping down doing up his equipment, preparatory to leaving the line, when a shrapnel shell burst on the parapet about three feet above our heads. Pat gripped his sides and fell. Turning to us he exclaimed, ‘I’m gone, goodbye lads, shake hands.’ He held out his hand, I gripped it, when he turned over and rolled in pain.

“I immediately sent for stretcher bearers, and with the aid of another lad, undid Pat’s clothes, and dressed his wound, which was a jagged one, about three inches long, in the small of the back near the left kidney. He complained of a dull pain in the stomach, and said he felt himself running away there. I expect he had internal hemorrhage.

“The stretcher bearers took him to the dressing station, but I believe the doctor held out no hope from the first look. He died that night, and is buried near ‘Trones Wood’ in a soldiers’ battlefield cemetery.

“Pat was our Platoon Sergeant, and the boys of the 11th Platoon felt his death keenly, as he was an honest, straightforward sport, a good, game soldier, and had the fullest confidence of his men. I may say he was calm and collected right through, and seemed to know as soon as he was hit that he was fatally wounded.”

The Collingwood Football Club – and indeed the whole football world – was devastated by Rowan’s death, and none moreso than Doc Seddon. He, of course, would come home and fulfil the promise he had made to his mate, helping to raise young Percy Rowe, who had been born seven months before his father died. (The boy ended up being a footballer himself, spending some time with the Collingwood reserves, and served with the RAAF during the Second World War.)

The prevailing sentiment was perhaps best summed up by the Football Record, in its opening round edition for 1917, which paid this simple tribute: “Paddy Rowan (Collingwood) – stout, sturdy and fair in everything he did.”