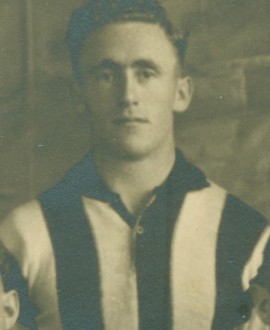 Pat Fricker holds the dubious distinction of being among the least famous of all Collingwood captains.

Partly that’s because his time at the top was brief – less than a year. Partly it’s because that time came in the midst of the Second World War, when attention was understandably cast elsewhere. And partly it’s because he had rarely seemed to be an automatic starter in the team, let alone its leader, before gaining the top job.

His journey to the Collingwood captaincy tells part of the story behind his low-key status. He was born in Toorak, went to St Mary’s Convent at Thornbury, then later Christian Brothers at Abbotsford, where he captained the footy team and won the school 100-yard and high jump titles, as well as being an outstanding swimmer and tennis player.

He played footy outside of school with the Thornbury CYMS team, where he made a name for himself as a centreman/wingman. Collingwood paid attention, and invited him down to play some practice matches in the 1935 pre-season. He was super impressive, playing mostly in the centre, and the Magpies snapped him up straight away.

As might be guessed from his athletics background, Fricker was an athletic and smooth-moving midfielder. He was quite tall, and his leap allowed him to play against much taller opponents, even at full-back. But his favourite areas were wing and centre, where he could break free or get the ball in space and send it to his forwards with his trademark polished disposal.

In many ways, he was like a slightly less finished version of Marcus Whelan. And indeed in his first few seasons he played mainly as Whelan’s understudy, filling in in the centre when Marcus was missing. The trouble was he didn’t miss often, meaning that Pat only played 19 games across his first three seasons (in between he played with Collingwood Districts, where his brother, Dennis, also played before going on to Northcote). So the Magpies began to experiment with him in other positions, sending him to the wing, to full-back, to half-back, the back pocket, forward flank, forward pocket and even into the ruck. Wherever he played – and Collingwood ended up using him in just about every spot on the ground – he did well, but seemingly not well enough to make the spot his own.

Fricker enjoyed his most complete season in 1938, with 13 games, but the Magpies dropped him from the senior list before the 1939 season. He immediately received offers from several other VFL and VFA clubs, but he wanted to stay at Victoria Park, so returned to the reserves and hoped for a recall. That came just a few weeks into the season, and this time Magpie selectors pigeon-holed him as a back-up to regular full-back Jack Regan. The result was that he could manage only four games for the year, followed by nine more in 1940.

In 1941, however, things began to change. He managed 13 games (missing three more through disqualification) and managed a career-high seven goals from a half-forward flank against Melbourne in Round 5.

But any late-career renaissance was put on hold when he joined the army in 1942. He had a stint serving in Darwin – where he put the skills he’d developed working at Dummett’s boot factory in Collingwood to good use, being in charge of the army’s Northern Territory boot repair workshop – and later spent eight months in Borneo. While in Darwin he twice played in a summer football competition featuring up to ten services teams, and one year he finished equal second in the B&F, behind Hawthorn’s Alex Albiston and tied with Alan Killigrew.

He captained a number of services teams during his time at War, and that seems to have been a factor in Collingwood’s decision to make him their captain when Fricker was stationed at Melbourne for the 1944 season. The Magpies were light on for experience and Fricker was a sound choice, as The Argus noted: “Pat Fricker, Collingwood’s new captain, is the only member of the 1935-36 premiership teams at present available. He is proving an inspiration to his young charges with his dashing and determined play from the centre.”

Unfortunately, his time as Magpie skipper was to be shortlived. He played the first 12 games of the year and was on track for his most consistent season ever, but then he was transferred at the end of July to continue with the army and he never played VFL football again.

In the end, Pat Fricker’s Collingwood career spanned 10 years but amounted to only 70 games. He was a more than capable understudy to two of the all-time greats in Marcus Whelan and Jack Regan, and a versatile, reliable fill-in all over the ground. But his last year showed he was also a fine leader, one whose appointment as captain was just reward for years of persistence, determination and loyalty.