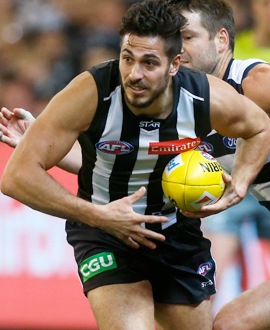 Karnezis was a unique player, for he stood 191cm but had the capacity to play in the midfield as well as go forward where his height stood him in good stead.

He was drafted to Brisbane in 2010 as a half forward where he “felt most comfortable” in his junior days as he told The Age. He began his days as a Lion playing predominantly in attack, kicking 17 goals in 11 games in 2011 but sought to move further afield in the years that followed. He received limited opportunities in 2012 and again in 2013 despite several impressive performances for the Brisbane reserves.

Groin problems restricted his progress during his first pre-season at Collingwood, denying him the opportunity to build his fitness base and press his claims for a senior berth during the NAB Challenge.

He made his first appearance as a Magpie in the third round of the VFL season against Coburg, and he wasted no time in making an immediate impression, kicking three goals from five kicks.

Karnezis followed that with a further four goals against Essendon at Windy Hill and another six against Geelong four weeks later, raising the hope of a mid-season senior debut.

Sadly, injuries put paid to any hopes of a promotion. Karnezis damaged his hamstring during training in the lead up to round 11, sidelining him until the VFL team’s trip to Morwell in round 12.

It didn’t take him long to find his best form, slotting four goals in the loss to the Northern Blues at a windswept Preston City Oval.

Further injuries meant he was not sighted again for another three weeks, and while he played out the remainder of the year in the VFL, he was unable to break into the senior outfit.

He remained in the match committee’s mind until the final rounds, when he was named as a senior emergency.

Karnezis threatened to leave his mark on the VFL side’s Elimination Final against Sandringham, only for inaccuracy to mar an otherwise lively performance in windy conditions at Victoria Park.

A four goal haul in the NAB Challenge opener against Hawthorn the February whet the appetite, but sadly his opportunities were to be limited. Karnezis would play only four senior games in the Black and White, and none after round seven.

He announced his retirement from the game shortly after the season and returned to local football, where he played for West Preston.